According to folks in the know (most of whom write fantastical books about UFOs and Bigfoot), time runs a bit differently in the Bermuda Triangle. It's the interference of natural forces, or aliens, or whatever is the theory of the moment to account for the vast numbers of missing boats, planes, and people in that cursed region. Something must be messing with our sense of time, after all, because it seems like just yesterday we had entered the area looking for a missing pilot and here it is nearly two years later and we still haven't completed the task. Wait, don't tell me you forgot this important mission? Fortunately Hidden Expedition: The Uncharted Islands, the latest adventure/hidden object hybrid from Big Fish Games Studios and Floodlight Games, and the latest installment in the Hidden Expedition series, is here to remind us all. 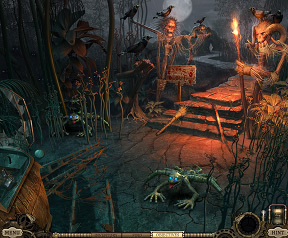 Yes, the long-awaited sequel to Hidden Expedition: The Devil's Triangle has finally arrived! H.E.A.T. (that's the Hidden Expedition Adventure Team to newbs) is back and is finally going to rescue the pilot! Well, maybe rescue the pilot. More like get involved in a 300 year old family feud involving an inventor who stole from DaVinci, his resentful daughter, and some dude named Baron Undertow who, as you may have guessed by the name, has no sense of humor (or fashion sense for that matter). But no matter, you have the whole team backing you up! Although, come to think of it, the team consists of (a) you, and (b) a somewhat loopy submarine pilot/mechanic who is stuck somewhere on the first island you encountered. Oops, looks like you're on your own with this one.

The story picks up as you wake up from the rather spectacular glider crash that ended The Devil's Triangle. You meet a mysterious woman named Kathy who immediately fills you in on the back story, so no playing of the first game is necessary (although you really should, it's a gorgeous, fun game in its own right). Kathy, caught in the middle between father and daughter (and apparent owner of a kicking gingerbread recipe) needs you to help this oh so dysfunctional family before the real villain of the piece, the Baron, manages to break the DaVinci node, the object that is keeping him, his minions, you, and everyone else trapped on this small series of islands. If the Baron isn't stopped he will take the fantastical technology developed by Gideon (the father) and unleash his evil upon the world. 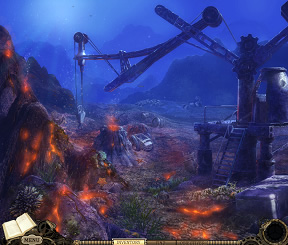 Hidden Expedition: The Uncharted Islands plays like a standard point-and-click adventure, with all actions accomplished with the click of a mouse. It features the usual tropes of a changing cursor to indicate items or navigation points, showers of sparkles to indicate areas of interest, a refilling hint feature, a puzzle skip timer, and the standard adventurer's notebook to keep track of the vast array of clues that you will stumble upon as you wander these islands, interacting with the poor folks who are stranded therein. Also involved is a lot of wandering around, puzzle solving, hidden object scenes, and mini-games, all of the bells and whistles of today's adventure hybrids.

The mini-games are a mix of the usual (sliders, pipe puzzles, etc.) and some nice original games as well. As for the hidden objects scenes there are four types: The standard "list" type (find a list of objects in a pile of junk); a "find the matching pairs" type (find two related objects that make a pair); general hint types of the "find all of the butterflies in the picture" mode; and most spectacularly a "layered" type which features digging through multiple layers of complexity involving a lot of finding, manipulation, and problem solving. For those who love hidden object gaming Hidden Expedition: The Uncharted Islands has something for everyone.

Analysis: Big Fish Games Studios is known for their stunning and amazing games, and Hidden Expedition: The Uncharted Islands is a worthy successor to that tradition, no matter how long it took to arrive. The quality shows in every area of the game: the complexity of the hidden object scenes, the dazzling array of puzzles, the gorgeous scenery, the wonderful music, and most especially the intriguing and amusing story and characters. 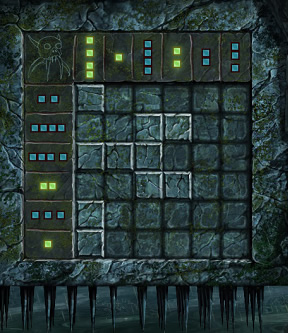 The backgrounds are of course lovely to look at, although they do pale slightly in comparison to the luminous scenery of The Devil's Triangle. Visuals are crisp, clear, and easy on the eyes, even in the hidden object scenes. The music matches the mood perfectly to where you are in the story, be it on Noferia (sort of a second rate "island of lost boys"), the underwater scenes, or the final battle atop the island that houses the DaVinci Node. the difficulty levels of the mini-games range from mind-bogglingly easy (tic-tac-toe, seriously?) to head-bangingly hard, especially in the "extra" adventure that comes with the collector's edition. The hidden object scenes are very tough due to a combination of factors including the dreaded "shrink something down to thimble size and hide it behind something else" mentality that pops up every now and again.

There are a few minor problems with the gameplay that I found. The hidden object scenes, already tough from the "layering" and other variations, can be difficult to see especially if your vision isn't at its best. Hiding a small dark object in the corner of a dark background is not particularly clever. A couple of the puzzles are picky in their click points, which can stop a player in their tracks trying to figure out what went wrong. And the "clickable" areas in the hidden object scenes range from too small (it can take multiple tries to snag a really small object) to too large (the navigation area to move out of the scene can interfere with picking up items near the bottom of the screen).

So was the nearly two year wait for Hidden Expedition: The Uncharted Islands worth it? Without hesitation, a resounding: YES! Despite the minor flaws in the gameplay this is a fantastic game, permeated with the humor that the Hidden Expedition series is known for. And it's even worth playing just to read the constant narration in the "journal" set down by the intrepid explorer you are playing, as well as for the little touches like the signs, graffiti, conversations, and the various notes and articles scattered around the game. Who doesn't love reading an article in a newspaper called The Daily Peril (motto: "read about people worse off than you")? By refusing to take itself too seriously Uncharted Islands proves a breath of fresh air and an antidote to the glut of "dark, mysterious, spooky, angsty" hybrids flooding the market these days. With two modes of play, casual and expert, and the ability to turn off the tutorial, Hidden Expedition: The Uncharted Islands is fun for everyone, from newbies to the most hard-core adventure addicts. Most definitely worth the wait!

A Collector's Edition is also available. It includes wallpapers, concept art, screensavers, the soundtrack, an extra adventure, and a built-in strategy guide. Remember that Big Fish Game Club Members pay only $13.99 for Collector's Editions (or 2 club credits), and collector's editions count 3 card punches of 6 total needed for a free game.

Take the next set of items

Use the wire nippers on the grate, then click the box floor to get the motor body.

Clicking on the colored buttons will produce two arrows that spin around the map. Your goal is to click the same button to stop the arrows when they line up with the colored lines on the map. Use the dial to control the speed of the arrows.

Click the dial and spin it until the number from the suit is aligned with the white dot at the bottom of the dial.

The dial will circle one letter and point to one two-digit number.

Enter the code on the combination lock below the dial.

The object is to use the levers to move the weight to the center vent.

To solve the second part of the puzzle, each of the sixteen pieces must be put in slots on the ring. First determine what kind of symmetry the rune has, then put it in any of the four slots next to the sketch that has the same kind of symmetry.

I had loved the last installment of the series, so this one was especially disappointing. It felt like the game designers had crammed the demo hour full of goodies just to get us hooked, and then realized that there was no incentive to make the rest of the game any good.

Yes, the artwork was fantastic throughout, but the HOG scenes and puzzles got progressively lazier until I was just shocked at the nerve of the developers.

Grinny, I think dismissing the tic-tac-toe puzzle as "mind-bogglingly easy" misses the point :/ Difficulty levels can be subjective, but there's no excuse for phoning it in. While we're on the topic of lame game-extenders, I'm actually surprised not to have encountered some kind of 18-disc Towers of Hanoi extravaganza.

Take the next set of items

Use the wire nippers on the grate, then click the box floor to get the motor body.

Clicking on the colored buttons will produce two arrows that spin around the map. Your goal is to click the same button to stop the arrows when they line up with the colored lines on the map. Use the dial to control the speed of the arrows.

Click the dial and spin it until the number from the suit is aligned with the white dot at the bottom of the dial.

The dial will circle one letter and point to one two-digit number.

Enter the code on the combination lock below the dial.

The object is to use the levers to move the weight to the center vent.

To solve the second part of the puzzle, each of the sixteen pieces must be put in slots on the ring. First determine what kind of symmetry the rune has, then put it in any of the four slots next to the sketch that has the same kind of symmetry.

9,460 Views
3 Comments
chrpa— Back to the past, it's Retro Weekday Escape! So, we're going retro again (not very fruitful week behind). The first comes Vitamin Hana, with lovely and colorful room, who wants you to show some cooking skills. In Tototo Room you...  ...