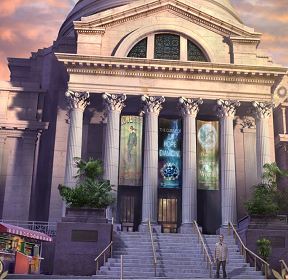 Dive right in to what turns out to be a very adventurous and rather dangerous extended job interview as you trace the dastardly bunch across three continents, learning both the history of the big blue rock and the venerable Smithsonian along the way. The game takes place in and around America's most famous institution, as well as locations in Europe and India as the race is on to find the fragments that have been removed from what was once one of the most famous of the French Crown Jewels. Click your way through the locations with the help of a changing cursor, a bottom-loading inventory, an electronic notebook, an interactive map, and a refilling hint system useful in both the adventure and hidden object scenes. 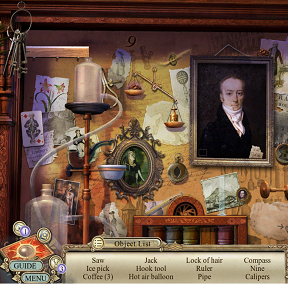 Analysis: Once again BigFish comes in guns blazing, with top of the line graphics and gameplay. Great pains have been taken to make the core hidden object scenes a multi-layered joy of working with line drawings, silhouettes, and the classic list format of object finding. That same attention also goes into the multitude of amusing puzzles and mini-games that are crammed into every nook and cranny of this delightful adventure. The graphics are dazzling, especially when accompanied by the top-drawer music and incidental sounds which bring the adventure to life. The character animation is a bit stiff, paired with competent voice acting which moves the story along at a pretty brisk pace.

The same attention to detail which graces the puzzles and games is also present in the controls which feature an interactive map which you can use to travel back and forth, the hint system which can do the same, and the plethora of side quests like finding all of the hidden Smithsonian logos or the morphing object which hide in the hidden object scenes. Best of all for those who love adventure gaming are the levels of gameplay, which include a customizing feature so that you can tailor the hint features to suit your own tastes and experience level. Is it perfect? Well, maybe not, as once you leave the venerable Smithsonian the other locations are not as fully explored as they could be, making the game the shortest of the Hidden Expedition series. On the plus side, you get a fully realized adventure, no "To Be Continued..." this time around. With the top shelf graphics, gameplay, and overall design Hidden Expedition: Smithsonian Hope Diamond does its subject proud as one of the best download adventure games of the year. Time for a new Expedition!

Note: Hidden Expedition: Smithsonian Hope Diamond is currently only available in a Collector's Edition, which includes wallpapers, music, animations, extra gameplay (including both a new adventure and the ability to replay each and every hidden object scene and mini-game), and a built-in strategy guide. Remember that Big Fish Game Club Members pay only $13.99 for Collector's Editions, and collector's editions count 3 card punches of 6 total needed for a free game.