Hidden Expedition: Smithsonian Castle, the newest hidden-object adventure from Eipix Interactive and Big Fish Games, opens with a lady scientist in the 1800s having a science-like breakthrough. Hooray! But then of course her children ruin everything, with her Darwin Award-winning daughter gleefully wandering up to the dangerous electrical device to get sucked in, and the scientist destroys the device in a fit of despair, so it was nice while it lasted, I guess. Back in present day, you and your fellow H.E.L.P. agent are called to the Smithsonian Castle, the Smithsonian Institute's administration building, when a strange power outage reveals an intruder making a strange theft. It quickly becomes apparent this ain't your average burglary, however, and your thief ain't your average thief either. It's a wibbly-wobbly, timey-wimey adventure as you uncover a love and a caper that spans centuries. You'll hunt for items through a variety of hidden-object scenes that change how they play, solve so many puzzles and minigames it's a wonder anyone at the Smithsonian can get anything done, and learn that the Smithsonian's insect cabinet was built in the 17th century and assembled from walnut, oak, and fruitwood, and... wait... I feel... weird. What's happening to me? Am I... learning? Is this an... educational game? NooooOOooOOoo! Someone fetch me some episodes of The Real Housewives of Wherever, STAT! 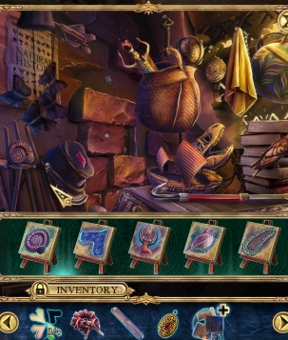 Okay, so while Hidden Expedition: Smithsonian Castle clearly has a vested interest in trying to make you S-M-R-T-er, it at least does so in a way that keeps you engaged rather than bashing you over the head with factoids every two steps. In addition to the fact cards you can find and peruse at your leisure, the game also knows when to slip in some subtle information as you explore, both about the Smithsonian itself and other people, places, and items of historical importance. Smithsonian Castle has a tremendous amount of puzzles and minigames scattered throughout that keeps things fresh and interesting, and while many of them are simply different presentations of familiar concepts, they fit into the story and setting nicely... making fiber matches to date a letter, for example, or aligning markers for a facial recognition system. There is admittedly a lot of backtracking, but the fast-travel map takes much of the sting out of it, and of course the highly customiseable difficulty settings means just about anyone can enjoy the game the way they want to. 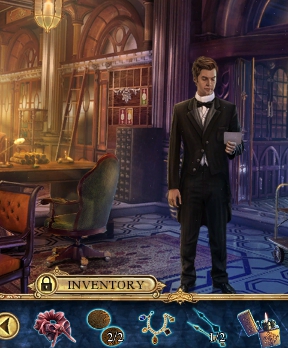 The gameplay actually feels like it's taking precedence over the plot in a big way, which isn't necessarily a bad thing. The story isn't bad by any means, it's just sort of there... there's no real emphasis on any sort of foreshadowing or surprise, you're largely going to figure out what's going on and exactly what will happen very quickly. There are a few minor surprises, and a lot of discussion about the potential impact of time travel on present day, and even a mini-game where you struggle to open a door while someone else tries to pull it shut which I believe is a first. It's a comfy narrative, to be sure, it's just sort of there as padding for a more engaging amount of gameplay. Though the game still is beautifully illustrated (apart from some weird facial expressions) and well acted (... mostly... ) this is definitely a game that puts substance over style. It's not just that it's long, although it'll likely take you around four hours or more to get through the main game, it's that it's constantly throwing up a wide variety of puzzles and clever minigames at every turn, which balances nicely against the more traditional "use item X on obvious place Y" point-and-click elements. Hidden Expedition: Smithsonian Castle is fun, smart, and mentally engaging in all the right ways, and the perfect lazy afternoon accompaniment.