Life as an agent of H.E.L.P. (Hidden Expedition League of Preservation) is never dull. Why, just today you and your sidekick Sam are jetting off to the wilds of Montana to investigate both a strange radio signal and recent seismic activity in the area. All you need is your trusty H.E.L.P. box and some brain power and you'll have the whole thing solved by tea time. Never mind the suspicious scientific installation just down the road and the mysteriously missing child genius, you've got a job to do! Yes, the Hidden Expedition team is at it again with their latest hidden object adventure, Hidden Expedition: Dawn of Prosperity, the ninth in the series. Eipix interactive and Big Fish Games have once again gifted us with with top of the line adventuring and hidden object finding along with a soupcon of trivia learning. 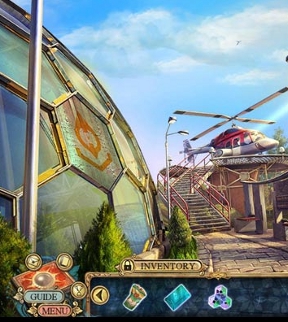 Hidden Expedition games are often stuffed to the gills with imaginative puzzles, hidden object scenes, and side quests, and Hidden Expedition: Dawn of Prosperity is no exception. The mini-games and the object finding scenes are varied and multi-layered, leaving the conventional "here's a list of things to find here" in the dust. The gameplay can be so engaging that you often tend to ignore the storyline, which unfolds at a leisurely pace, creating a sense of discovery not often accomplished by other games that tend to dump a ton of exposition right at the start. A story that begins with tremors in Montana soon takes a sharp left involving an evil corporation (is there any other kind?), a utopian underground society and an overworked genius who has had quite enough, thank you, and would like a vacation. Players can also stimulate the little gray cells by finding and reviewing fact cards which entertain with tons of trivia about science that might give you the edge for your next Trivial Pursuit night.

The layers within layers concept which permeates every facet of the game extends to the players' inventory, which can contain items which can be opened and manipulated and added to before they may be used. Navigation by magical map reduces the back and forthing which can kill the enjoyment of a really good adventure and the H.E.L.P. box is...well, helpful for reading trivia cards and keeping track of short-term goals. Since this is an Eipix game you can of course expect a lot of gorgeous scenery, haunting music and semi-decent voice acting. Toss in some interesting characters, evil corporate overlords, and a so-cute-it's-diabetic-inducing racoon on top of the gorgeous scenery and engrossing gameplay and you have a killer way to spend a day. Let's just hope all that mucking about in things man wasn't meant to mess with doesn't trigger the Yellowstone super-volcano that's due to go off any day now...

Note: Hidden Expedition: Dawn of Prosperity is currently only available in a Collector's Edition, which includes wallpapers, music, cut-scenes, concept art, extra gameplay (including the ability to replay hidden object scenes and mini-games, a making of feature and a built-in strategy guide. Remember that Big Fish Game Club Members pay only $13.99 for Collector's Editions, and collector's editions count 3 card punches of 6 total needed for a free game.