OrangePixel has done it again! The studio known for its nigh-on perfect retro recreations has crafted a top-down arcade RPG similar to the old Gauntlet series. Heroes of Loot puts you in the shoes of an adventurer fighting his way through dungeon floor after dungeon floor, dispatching enemies and grabbing loot left and right. It's just the sort of pick up and play experience that works well on mobile devices, and you'll find yourself quickly hooked by its creative blend of action and RPG elements. 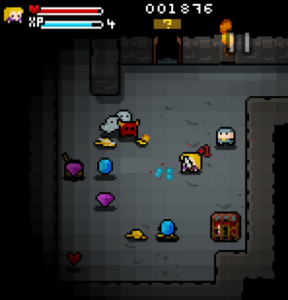 The game begins with a simple choice: who's your hero? The Elf, Warrior, Valkyrie and Wizard are at your service, each with their own stat rating. They're all here for the loot, of course, but let's be honest. so are you. Character in hand, use the virtual analog stick and virtual attack stick to move and fire in any direction. Crawl through dungeon after randomly generated dungeon, your eyes peeled for gold and places to spend it!

Heroes of Loot hits the mark when it comes to portable dungeon crawling bliss. Levels are just long enough to give you a taste of adventure, but not so intricate that you'll get lost or feel like you have to take a break. Puzzles are minimal at best, the action is perfectly paced, and shops come along right when you're ready to upgrade. If there's any downside to the game it's that it runs the danger of attracting retro RPG fans who could be disappointed to see the intense, almost shmup-like action take top shelf over character development. But do you know what? For an on-the-go casual dungeon crawler, you can't do much better than Heroes of Loot!