Playing Shortbreak Studios' action adventure/point-and-click puzzle escape game Hellraid: The Escape for iOS is sort of weird. The gist is that you're trapped and tormented by demons in an infernal world brought about by a power-hungry wizard, and you begin to find notes left behind by a totally legit sounding and not at all suspicious benefactor who claims he was imprisoned for trying to help, and he's willing to help you if you'll just release him. Standing in your way are a series of eight chambers filled with lethal puzzles, traps, demons, and shiny things, and while it seems like one dopey, schlubby looking dude with no shirt might not stand much of a chance against the forces of evil, well, what else are you going to do between torture sessions? And hey, don't worry if you screw up. You'll just be reincarnated back to your coffin at the start of the chamber you're currently working on. So, no matter how often you're sliced, diced, shot, crushed, impaled, or otherwise rendered finito, you can always pick yourself back up and try again. ... is it Tuesday? It feels like Tuesday. Heeeeeeeeeeat of the moment! 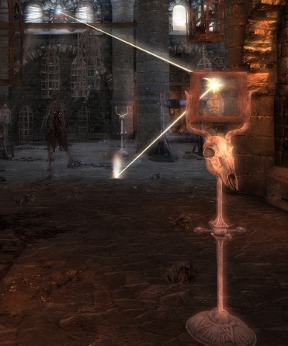 Hellraid: The Escape uses the left joystick to move around, and the right to look about. Interactive items are marked with golden sparkles, since just because you have an underworld full of unspeakable horrors that's no reason not to dazzle, and tapping them will bring you into a close up view to interact. Each chamber is typically made up of a handful of rooms and hazards, so figuring out a safe way through, as well as solving any puzzles in your way, is the name of the game. You could wind up having to tilt your device to maintain balance as you inch slowly across a wire suspended above a pit of spikes, or you might need to figure out how to activate a switch from afar so as not to alert the monster down the hall. Hellraid: The Escape actually feels like it's at its best when it's leaning towards a more traditional point-and-click adventure route, since the action elements are awkward enough at times to turn frustrating. There's a puzzle where you have to slot an arrow through rotating discs that is sort of awkward to manipulate, for example, and you wind up having to do it again, only with an extra disc and a time limit. The instant reanimation tends to make death feel like a temporary inconvenience rather than something to be feared. You don't lose any progress, so you start to picture our protagonist heaving the stone lid aside, then laying there staring at the ceiling with a resigned sigh like a guy about to pull a double shift at his desk job. Only his desk job involves dying over and over in the most painful ways possible. Are we sure it's not Tuesday?

Despite those complaints, however, that's not to suggest Hellraid: The Escape is in any way a bad game, just one that might not be what traditional escape or adventure fans might be expecting. Heck, it's not even what I was expecting considering Hellraid proper is an upcoming hack-and-slash action game. The design is absolutely gorgeous, which is something considering how many bodies and mutilated monsters you'll encounter, and the lighting in particular lends itself to the atmosphere exceptionally well. The creature design is positively ghoulish, and you want to keep playing just to see where you're going to go and what's going to try to kill you next. Though the game is on the short side, the chambers grow in size and complexity in ways that allow for a lot of welcome variety. The blend of action and brains might not always be perfect, but it keeps you on your toes and challenges you as you progress. It's ambitious in a lot of ways, from the puzzle and gameplay mechanics it experiments with, to its stunning aesthetic. With no in-app purchases of any sort, it's also a welcome respite in a market that often goes the opposite direction. Hellraid: The Escape is just plain ghoulish fun, with the sort of high quality production values and sharp visuals the iPad is made for, but doesn't often get treated to. Hey, and after you're done, let's go get breakfast! For some reason, I feel like a pig in a poke.