Haunted Past: Realm of Ghosts

Haunty spooky ghosty hidden object adventure games are as common as the dark nights they take place in, but Haunted Past: Realm of Ghosts felt like doing something different. Aside from its well-built interface and crisp visual presentation, Gogii Game's hybrid release offers a different take on traveling between dimensions and hidden objects in general. Instead of just looking for things, you must also hide them, a sort of treasure hunt you play with yourself! It's every bit as polished and intriguing as the studio's previous releases, like Princess Isabella: Return of the Curse and Robin's Quest: A Legend Born. 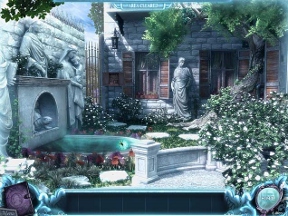 Haunted Past: Realm of Ghosts tells the story of Sara, a young woman who inherits a home that's filled to the brim with restless spirits. Not only that, Sara discovers she can communicate with them via mirror, allowing her to step into the ghost realm and manipulate objects before returning to the world of the living. There's something fishy going on with the history of the mansion, too, involving a murder, a cover-up, and a man who was wrongfully imprisoned. Sara will find clues all around the place as she ventures from room to room.

More of a casual adventure than a hidden object game, Haunted Past turns you loose in a series of small areas, blocking your progress with well-locked doors and other obstacles whose puzzles demand to be solved before you can continue. You'll need to do quite a lot of investigating in this game, something many casual hybrids only present tangentially, checking out everything of the smallest interest and picking up any items you can get your hands on. You'll need to move back and forth between areas to solve the puzzles, but as long as you're adding to your inventory, you're progressing!

Hidden object scenes are short and rather easy, featuring just over a dozen things to find and no crazy tricks to hide them. The hint system is very forgiving and recharges faster than you can say "Where's that other harp string I needed?!". Mini-games are short, but they're unique in that they're more than a rehash of the basic puzzle types we've been playing for years. A skip button eventually allows you to slide past each one. 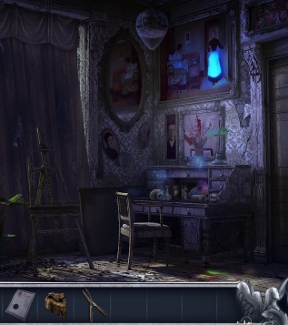 Here's the real fun bit: the ghost realm. Any time Sara sees a mirror, she'll need to use it to enter the ghost realm so she can find and subsequently hide certain objects. The first one is a great, non-spoilery example. In the ghost realm, locate some bricks, find a hammer, get a fishing rod. Stash the rod in the broken fireplace, then use the bricks to seal it up. Shove the hammer in a drawer and return to the normal world where your objects will be safely kept, ready to help you out. It's a brilliantly entertaining mechanic that makes you feel like you're a part of some inside joke. How often do you get to learn why odd items are placed in odd places in a hidden object game?!

Analysis: Haunted Past: Realm of Ghosts is a snappy, well-illustrated game that screams "professional" from every screen. The artwork is drenched in gorgeous, dark shades of wine and purple contrasted with overexposed blues and whites of the ghost realm, and they're so rich you'll want to drink it all in every time you switch areas. The interface runs smoothly, never getting in your way or chugging along like it's thinking about what to do next. It may not seem like a big deal to have a smart game engine, but if you've ever played a game that doesn't have one, you'll appreciate the speed at which Haunted Past runs even more.

One problem the ghost realm mechanic presents are frequent hidden object scenes. Usually, you'll work through an object scene to find a few key items you need to progress. More often than not, you'll complete one of these scenes, enter the ghost realm, then complete it again with slightly different lists of things to find. They're short enough to not be bothersome, but having to do the same scene twice in a row is sort of a bummer when the game has so many more cool things to show off.

It may not discover new territory in storytelling or setting, but Haunted Past: Realm of Ghosts in an almost flawless hidden object adventure game from a studio that knows what its doing. The creative use of the ghost realm mechanic adds a lot of life to the experience, and the puzzles are just unique enough to inspire you to keep playing!