"Oh Roberto," croons Lucia, "I know that together we can face any danger, and you can always count on me!" Until they can't, and he can't, when Roberto is stabbed right in front of his beloved's eyes a few moments later, and then whisked away by dark magic. Way to drop the ball, Lucia. To make things even more ironic, Roberto was in the middle of writing a letter to you for help... he was, after all, your student in magic before he became the duke of Florence, but recently he's become concerned someone might come after him for his work. Looks like he was right, and unless you can prove her innocence, Lucia's going to be executed at midnight in ERS Game Studios' hidden-object adventure Haunted Legends: The Dark Wishes. Lucia is actually convinced Roberto is still alive, and it turns out he might have gotten wrapped up in some serious magic indeed, as one of the Fates themselves is here on Earth looking for the Philosopher's Stone. She doesn't say it was stolen by the creepy little guy who keeps making threatening messages appear at you, but, well, c'mon. Now you're in a race to find the Philosopher's Stone before he can figure out where it is and how to harness its power without killing him, and you'll need to travel the world, solving puzzles, finding items, and, yes, rooting through hidden-object scenes to thwart him... with the help of a little magic of your own. And I guess the floating, skeletal goddess of fate. She's probably a little helpful too. 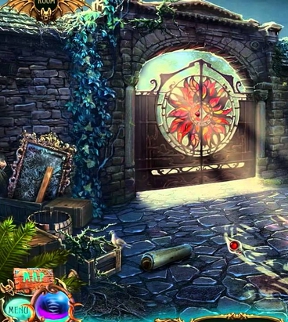 If you've played a hidden-object game before, then The Dark Wishes is going to hold few surprises. You click around to interact with people and your environment, and use the items you find to get past obstacles or solve puzzles. During hidden-object scenes, you're given the usual laundry list of items to hunt down, and you can bet you'll need to do a lock of backtracking, too. Like most games in the genre, The Dark Wishes has a tendency to let you make a little bit of progress before throwing up an arbitrary problem that requires you to go back to places you've been and re-play hidden-object scenes or otherwise comb the area to use whatever new item you might have gained. It may be par for the course for the genre, but it's especially frustrating here, because not only is the game absolutely gorgeous, it actually spins a more complex yarn (pun intended) than most. The visual design for the Fates is excellent, and the entire game drips a sort of morbid beauty that bolsters the supernatural spin on classic mythology infusing the storyline. ERS has always had a team of fantastic artists, and the characters animate more naturally here, even alongside some CGI creations that fit into the visual design much better than in games past.

Unfortunately, you're unlikely to find the game much of a challenge since most of the puzzles are simple variations on classic concepts and fairly straightforward to boot, making the game feel overall a little on the short side. As gorgeous a ride as Haunted Legends: The Dark Wishes is, you're going to be speeding right through it, and probably wish it had more teeth to give you a run for your money. Despite that, its beautiful, dark design, and even a shocking scene or two means The Dark Wishes is surprisingly engrossing. Out of all of ERS Game Studios' titles, it feels like the one with the most concrete worldbuilding and a genuinely high stakes plot, one that keeps you involved with cutscenes right when the action needs them and an interesting cast of characters. Haunted Legends: The Dark Wishes isn't as meaty or challenging as it could or perhaps should be, but it features what might be its developer's best design and style to date, and the way it spins its gory good tale makes it a captivating evening's play well worth firing up.