I don't like hotels at the best of times, largely because I'm neurotic about toilets and beds that are not my own. (So many butts!) Add in some vengeful spirits, and, well... look, how uncomfortable can sleeping in your car really be? In Elephant Games' creepy hidden-object adventure Haunted Hotel: The X, your sister Samantha has gone missing while looking into the legends surrounding the derelict old Lexington Hotel, whose amenities include shuddering ghostly terrors and an isolated forest where nobody can hear you scream. Look, I'm just saying when a hotel's history contains a "brutal butchering", maybe stay elsewhere? But if you want to find your sister, you'll have to brave the mysteries within, and hopefully survive long enough to get out of the 1970s. A tape player? VHS? Now that's scary! 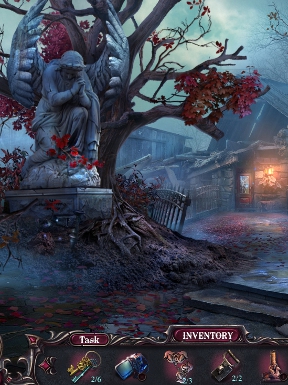 Haunted Hotel: The X has all your now-standard casual game mechanics... fully customiseable difficulty, a fast travel map, and collectibles like morphing objects and puzzle pieces for the achievement trackers. You'll click your way through areas, finding items to use and solving puzzles, while occasionally getting menaced by jump scares and demonic squirrels. As you might expect, there's a lot of backtracking... find your way forward blocked, go back to look for item to proceed, look for tools to attain said item, and repeat as necessary. It's formulaic, sure, but Elephant Games has that formula finely distilled. Nothing ever drags on too long, puzzles and hidden-object scenes are carefully spaced out so that you run into them at an even pace, and the spirits of vengeful lovers always know when to sob mournfully just out of sight. There are an awful lot of objects stuck in cracks that need to be jimmied out one way or another, but you're kept on edge throughout by some stellar sound design and creepy visual effects... some subtle, some startling. Hey, I'll put up with an unholy wail or three for any hidden-object game that lets me use an item more than once instead of tracking down something different for the same sort of task. You may find yourself reaching for the hint button occasionally, or simply referring to your map to see which area has active tasks for you, less because the game is difficult, and more because sometimes enough time elapses between discovering an obstacle or locked object and finding the item you need for it that you can forget it existed at all. Please, you expect me to remember I needed to saw through some bushes waaaaay back at the entrance? You know I'm a gamer. You know what that attention span is like. MORE ACHIEVEMENTS FOR THE ACHIEVEMENT GOD. 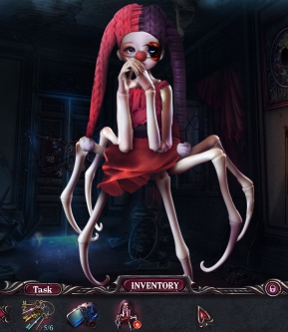 The story, apart from the rescue of your Darwin Award-winning sister, ultimately revolves around the spirit haunting the hotel, and you'll quickly start putting the pieces together as you find eerie scrawls, notes, and letters. Most of the plot initially feels like a fairly standard setup of an affair gone wrong, and, well, it kind of is, but there are enough twists to the way it's presented to keep you engrossed. It doesn't hurt either that the game is gorgeous, with rich colours and detailed environments. It's gory and freaky, sure, with bloody handprints and child's scribbles of people with their eyes scratched out, but the artwork is just so gorgeous and full of subtle animation like branches swaying in the wind, or faint faces swirling in fog, that it's easy to get smitten. I usually play games I'm reviewing in windowed mode, so I can take screenshots and write down notes ("Don't forget to mention the morphing objects." "Is garlic bread an acceptable business expense?"), but Haunted Hotel: The X might be the first casual game in a long time to make me switch to fullscreen at every opportunity to admire it... and, yeah, okay, to laugh at a few unintentionally hilarious scenes where people get thrown around like paper dolls by angry ghosts. I'm a terrible person, what do you want from me? But hey, I'm also a critic who's reviewed a lot of hidden-object adventures over the years, and with its stellar presentation and solid gameplay, I also think Haunted Hotel: The X is well worth your time, and it's certainly the best entry into the series to date. It's scary and strange enough to appeal to horror fans without completely alienating everyone else (Grandmas like articulated spider skeleton dolls, right?), and with a flair for drama and the unexpected, this is one ghoulish good game to be played in the dead of night.