The weirdest thing that has ever happened to me in a hotel was getting up one night to get a soda from the vending machine outside only to find the people across the hall eating the remains of the room service order we'd left out for housekeeping to pick up. Weird, awkward, and a case for no eye contact? Sure, but it's not "the forces of light and darkness are having an eternal battle for the fate of the world down the hall" weird, but that's the case in Elephant Games's hidden-object adventure Haunted Hotel: Eclipse. You and your detective friend James, who has the amazing ability to show up and take credit for every single discovery and plot advancement you make, find yourselves called to a hotel that seems to have dissolved into some sort of freakish battleground, and the maid insists all the guests are monsters. The supernatural isn't something a two-star review on Yelp will fix, though you probably still won't want to look at the sheets under a black light. 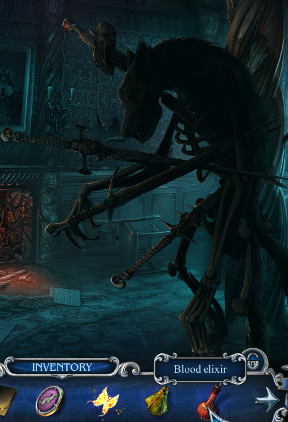 The best phrase to describe Haunted Hotel: Eclipse is "solid, and enjoyable". Though it continues Elephant Games's tradition of beautiful design and quality, the gameplay is very standard. You click around, gather a motley assortment of inventory items like the world's craziest kleptomaniac, solve puzzles, and hunt around in hidden-object scenes. The game actually winds up being extremely easy. You'll always know where you need to use items, usually because most of them are found pretty close to where their associated "puzzle" is and solutions are happily quite logical. On the other hand, you do get to keep and re-use a lot of items, instead of being forced to find another each time you need to accomplish a similar task, and you also get some magical creatures that can do your bidding. Maybe I'd take Fluttershy more seriously if her butterflies were magical eternally burning fire entities.

While Haunted Hotel: Eclipse doesn't break any new ground, however, with its supernatural storyline, stunning environments, and constant magical developments and scenes, it's never dull. It's a flashy game, despite a perplexing lack of music in many places and some seriously wooden limb animation, and at around three to four hours of average play time, a satisfying length for players looking for something more magical than scary. As long as you don't mind the clashes of infernal forces, the lack of free wi-fi, and the puzzle locks you have to solve every time you want to get into your room/the study/the toilet, Haunted Hotel: Eclipse is worth a visit.

Note: A Collector's Edition is also available for PC and Mac. It contains a bonus chapter, art gallery, strategy guide, and more. Remember that Big Fish Game Club Members pay only $13.99 for Collector's Editions (or 2 club credits), and collector's editions count 3 card punches of 6 total needed for a free game.