I tend to write my reviews as I play the game, getting down opinions and observations while they're fresh and altering them as needed as I go along. Which puts me in a weird position with ERS Game Studios' hidden-object adventure Haunted Halls: Nightmare Dwellers because my notes are just "??" and "??????" It's not necessarily the plot that's crazy. You've been called to investigate the theft of a crystal skull rumoured to belong to Morpheus, God of Dreams, only to find that the skulls power has begun to warp the area and turn dreams into reality while grappling with a tentacled madman. As most of us know, however, dreams don't typically make a lot of sense, and so you wind up having to deal with things like brains in bonnets, fashion-conscious flamingos, tea-sets that prance around on fingers, and armadillo safes. You know, like you do. 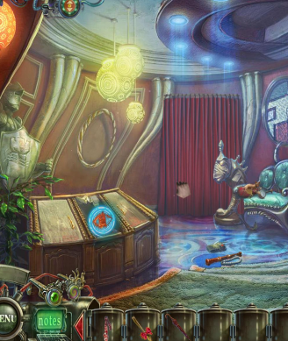 Nightmare Dwellers' gameplay is, for the most part, a straightforward affair with hidden-object scenes and gathering up an entire episode of Hoarder's worth of junk to solve puzzles. What's nice is that the game's difficulty is fully customiseable... you can choose to have no hints but enable the puzzle skip function, whether you want objects illuminated, even how long you want the recharge time on hints and skips to be. Some hidden-object scenes are self-contained puzzles, using the items you're tasked to find by silhouette one after the other until you get the object you really need. The problem is that the item uses in those scenes, which are themselves repetitive, are often weirdly illogical in a way that has nothing to do with the game's dream-like atmosphere. Use perfume to clean a dirty mirror? Oh, of course. The game's other unique mechanic are magic goggles that allow you to translate mystical messages by deciphering symbol puzzles, but since those puzzles never really change and the messages don't actually tell you anything that you wouldn't be doing anyway just by playing the game, it feels a little gimmicky and pointless.

Haunted Halls: Nightmare Dwellers is so over the top that it almost feels like it's trying to do everything at once. Heck, you can even play match-3 games instead of hidden-object scenes if you prefer. None of this is necessarily a bad thing, since it feels like Nightmare Dwellers is trying exceptionally hard to be creative... and it is, mostly, with vibrant and imaginative design that constantly surprises you as you play, and all the plot twists you could possibly want on top of its high production values. It's more comedically weird than it is scary, and the bizarre content means you'll definitely want to try the demo first, even if you've played and liked the other games in the series since the tone is so drastically different. A lot of players will likely finish the main game in under four hours, with around another hour for the bonus chapter in the Collector's Edition. Haunted Halls: Nightmare Dwellers is definitely an eccentric game that won't be for everyone, but it you love the weird and embrace the crazy, this is a polished, well-made game you should check out.