If nothing else, adventure games are always great examples of how not to do things. Take Haunted Halls: Green Hills Sanitarium, an adventure/hidden-object hybrid from ERS Game Studio, for example. How not to conduct a missing persons investigation. How not to react to demonic visions that nearly force your car off the road. And, perhaps most importantly, how not to run a sanitarium. 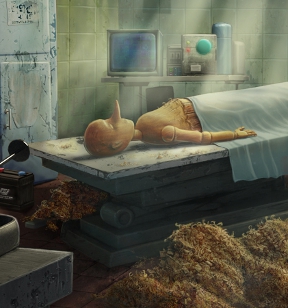 You play the role of a distraught young woman whose boyfriend, Tim, went off to investigate the Green Hills Sanitarium and hasn't been heard from in weeks. Rather than contact the authorities, you decide the best course of action is to track him down yourself, and you soon find yourself caught up in a mad doctor's mad experiments in his extremely non-regulation mad house. To escape the sanitarium safely, you'll have to rescue not only Tim, but other patients who are trapped within their own phobias as well, and each of them is held prisoner in a twisted cell that reflects his or her own deepest fears. Once again, I find myself glad I'm not a video game character, since my cell would apparently be full of giant squid, clowns, spiders, and lutefisk.

You'll be using the mouse to play the game, clicking to interact with the world. Objects you can interact with will sparkle slightly from time to time, and your cursor will change to an eyeball when you mouse over points of interest. While a lot of the items you'll need to progress are just laying around for you to pick up (marked by the cursor changing to a hand when you mouse over them), you'll have to search for others by solving hidden-object scenes or puzzles, both of which are indicated by yet more sparkles. Don't forget to check your notes from time to time to read the stories of the sanitarium's inhabitants, which may give you clues on how to help them break free of their torments.

Analysis: When I was a kid, there was a video store across the street from the supermarket that would rent you VHS movies for the princely sum of .47 per night. They had a rather spectacular horror section filled with low-budget schlock flicks, and every Friday after school my friends and I would rent approximately two dozen films with titles like "Luther the Geek" or "Moontrap" and binge all night on them. I tell you this so you know I have seen a lot of crazy stuff, but until I played Green Hills Sanitarium, I had never seen a writhing mass of tentacles playing two enormous electric keyboards. It just hadn't been done, and it was then that I realised this game was rad. That's the sort of thing you encounter in this game, and it happens a lot, making the game less scary, and more bizarre. 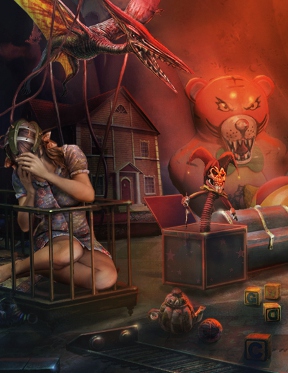 The flipside of this is that Haunted Halls is also extremely creative and is full of strange environment with stranger occupants. It's great to explore a place that deviates so drastically from the standard (boring) haunted house concept and just cuts loose, taking delight in surprising you with impossible concepts and a sort of goofy, cheerful oddness. While the puzzles you'll encounter will probably be variations of ones you've seen before, the manner in which they're presented makes them feel fresh and fun to tackle. The visuals for the whole thing are great; while people tend to look a little odd, the environments are extremely detailed and full of rich colours that bring the experience to life. The design especially shines for the prisons constructed for each patient, and I found myself looking forward to seeing each new one.

One problem you might encounter is that the creative approach to design also extends to the gameplay. While many of the item combinations you'll have to make are logical, such as a dead battery and a battery charger, some of them are just bizarre to better fit in with their strange environment and don't always make sense deliberately. This might not be so bad, but you could be using the right item in the right place, but you might be using it a few degrees off that mystical "sweet spot" the game considers to be correct. You might also want to avoid using the "hint" option outside of hidden-object scenes; it's supposed to point you towards spots you can make progress with inside a room, but it will often point out things even if you don't have the right item for them yet, and doesn't give you much of an idea of what to do with it, which can be confusing.

But despite these few flaws, Haunted Halls: Green Hills Sanitarium is still a wonderfully weird and extremely imaginative game that doesn't take itself too seriously. Although the story isn't outside the realm of cliche, uncovering all the strange sights the sanitarium has to offer is a lot of fun and is definitely worth checking out if the demo you're bored of the same-ol', same-ol' cavalcade of more "serious" adventure horror titles. And now, because you had to know it was coming, say it with me;

Right Side of the Building

Electric Fence/Right side of the Building

Gateway/Right side of the building

Right Side of the Building/House on the left/Operating Room

Right Side of the Building/House on the left/Relaxing Chamber

Cave of the Lion/Room No 10

wow.. 1st and only comment? strange... but this game wasn't too bad! Not the best hidden object game out there.. but it's no where near being the worst either. I actually liked it! It was well worth my "precious" BFG credit :)

Right Side of the Building

Electric Fence/Right side of the Building

Gateway/Right side of the building

Right Side of the Building/House on the left/Operating Room

Right Side of the Building/House on the left/Relaxing Chamber

Cave of the Lion/Room No 10

I LOVED this game, it combines hidden object and adventure. The hidden object part is just the right amount, not endless as in some other games, and breaks off with other puzzles. Can anyone recommend a similar game?

Hi Sara! If you're looking for more games in this vein to try, I would recommend you check out some of my favourites that come close to balancing hidden-object hunting and adventure perfectly:

Mishap: An Accidental Haunting
(Note: Lots of hidden object hunting in this game, but it's absolutely fantastic and I really recommend you at least try the demo because it's just so very cool.)
https://jayisgames.com/archives/2009/12/mishap_an_accidental_haunting.php

It was mediocre. I bought it so I played it through, but it wasn't very interesting and frankly, the ending sucked. There were also a few grammatical errors and that basically sinks any game for me. I wasn't very scared by the environment and I thought the files for the patients there were ridiculous and honestly a little insulting to people with real mental disorders. The game designers didn't seem to know what any of those disorders actually were.

Sorry Dora, this really wasn't my kind of HO game. =(

I'm not a young person but really enjoyed this game, just the right amount of puzzles mixed in with the hidden object parts of the game. I did have to use the walkthrough at some bits which were a bit obscure - e.g. who'd have thought about using a woodpecker on a "pinnochio" nose then sawing the nose off when it became a flute? Good game.