Poor Goblin Lord. He tried turning over a new leaf. He stopped trying to devour human flesh and chose a healthier lifestyle. One that would be good for his heart instead of the artery clogging innocents he usually devoured... so he started a vegetable garden. The only problem is he doesn't have a green thumb. In fact just the opposite. His neighbor, however, has the best looking carrots all around, and in a rage of jealous fury, or perhaps he was just "hangry", he sends his horde after the delectable veggies. But there was something else he didn't count on... this little rabbit farmer has a gun. Yes, in Harvest Defender you play as the swift rabbit shooting down goblin after goblin to keep them away from your growing plants. Obviously inspired by Plants vs. Zombies, Ottomoto's defense action game has plenty of guns and allies you can upgrade to keep your food safe. Be warned however. While you can replay the level, as soon as you move on, there is no going back. With no way to farm gold you have to be smart about your purchases. Some find grinding a boring weight on the gameplay, but Harvest Defender shows that without it you have to really think twice before you make a purchase. 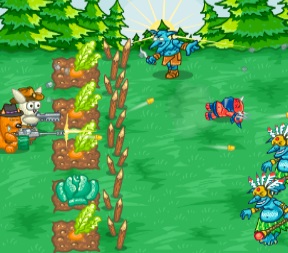 Much different from Ottomoto's well liked puzzle game, Risen, Harvest Defender is still a puzzle in its own way. The premise seems simple, using the mouse shoot at the goblins who are trying to collect your carrots. Later when you gain new weapons and friends to call on for special moves by using the hot keys provided ([1], [2], and so on for weapons and [Q], [W], and so forth to call your friends). The enemies will pluck your food and try to get back to the other side of the screen, but you still have a chance to kill them to save your harvest. While this is pretty straight forward, as I mentioned before there is no going back to play other levels. You have to make the most of that day. Each food left on screen with give you so much money, and you're probably going to want to try the level again if you lost a few. Keep this in mind as if you don't pay attention it will bite you in the derriere later in the game. You can't even sell back upgrades to retry your strategy. The only chance you have is when you restart the level, you also get to repick what you bought for that round. It really gives this shooter a different spin and while may not be up to everyone's taste it really does make Harvest Defender a different defense shooter from most of the others out there. So put down your hoe and pick up your shotgun because the goblins won't quit until everyone last one of them is Swiss cheese.

It's a cute little game so far, but it's very frustrating that losing a level forces you to start over with no extra money from killing the Goblins during the level you lost, so you essentially don't gain any progress from losing.

Is it just me, or is the moon designed like the "Scream" mask?

You really have to get best on every level to stand a chance of surviving later and even then if you don't upgrade your harvested vegetables enough you just won't get the gold you need to keep up with the enemies. I'm sure there's an optimal upgrade path but it'll take more than the single shake I gave it for me to suss it out.

Fun little game that really makes you think, not just about upgrade strategy but weapon selection, as each enemy is vulnerable in different ways. Definitely pays to upgrade food as much as you can, then firepower, and only bother about fences and companions later on (or if you have spare cash).