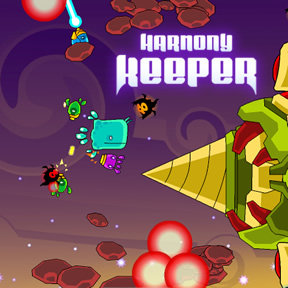 Ah, the cosmos. It contains the whole of everything that is, was and shall be. It is filled with the awe-inspiring beauty of the nebulae, the quasars and the familiar stars. Science cannot know how big the universe is, nor can it count the number of planets or star. Every time we get close to an exact figure, a giant space whale, dubbed Harmony Keeper, starts devouring celestial bodies to maintain the balance. Or at least, that's what this latest action/arcade title from MoFunZone teaches us.

In Harmony Keeper, you take control of this space whale using the [WASD] or [arrow] keys to move. When you put yourself near a star or planet the whale starts to eat it; how long this takes depends on the size of what you're trying to eat. The goal of each level is to eat the target planet. Each level also has option challenges that range from easy, like eat 25 stars, and to seemingly impossible, like killing a boss in one minute.

You won't be able to just swim, er...float, your way to your goals, because for some crazy reason people don't take kindly to whales devouring their homes. Now, despite its size, the Harmony Keeper doesn't have any defenses of its own. So, you'll have to hit the [spacebar] and use your mana to summon little creatures called guardians. Guardians automatically attack the enemies around them, but you can guide their fire by holding down the left mouse button. With five guardians to choose from and six available slots, you can pick which ones you can build your army based on what you need at the time. Guardians can be upgraded temporarily using mana during the levels and you can also set whether you want a guardian to attack the nearest, farthest, strongest or weakest enemy.

As you eat planets and stars, your Harmony Keeper gets more mana to summon and upgrade guardians, and it also gains experience. With enough experience, you level up and gain skill points. In between levels you spend those points to either beef up your whale or to increase the chances that your guardians will use their special attack. 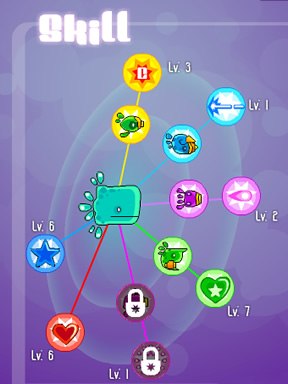 Analysis: Harmony Keeper scores some major points right out of the gate by having a unique premise. It might be the only game that combines elements of shoot-'em-ups with, well, eating. It is definitely the only one to feature a turquoise space whale. Complimenting the concept is fun gameplay. The first few levels may seem somewhat minimal, but soon you'll be dividing your attention between dodging enemy projectiles, eating stars and aiming your guardian's fire. The guardian system is neat and allows for quite a bit of customization.

As the cherry on top, the game looks good. It has a unique cartoony style that fits the game just right. The bosses are huge and change as they take damage, which shows you that you're making progress and gives you something new and cool to look at. Even small details have been included, such as your guardian changing appearance occasionally when you upgrade it during a level.

Harmony Keeper isn't perfect, however. The music isn't great, but even if it were it wouldn't matter because the sound mix is so uneven that gunfire quickly drowns out the music. The game is also short, only six levels, although you can keep playing after the end, with a new guardian added to your summon menu, to try for any challenges you didn't get. The difficulty curve is a little funky with the first three levels being almost too easy and the last three becoming noticeably more difficult. If you're having trouble, you might have to go back and grind earlier levels so you can beef up your health and guardians. Additional difficulty comes from the fact that your whale isn't exactly svelte. Sometimes you won't be able to dodge incoming projectiles, you'll just have to plow through and hope for the best.

Overall, the good far outweighs the bad in Harmony Keeper. The unique gameplay concepts and excellent art design should be more than enough to get you playing. Just remember what Carl Sagan said, "We are made of star stuff... and star stuff is whale food. Technically, we're all whale food." Really makes you think, huh?

Here's a tip, folks; Harmony Keeper doesn't eat children. Even though it may eat the rest of us. It's a matter of morals.

Fun game, just not my kind of thing.

One gripe that I have is that entering the summoning menu resets your "eat gauge," which means that trying to increase your defenses while working on a planet prolongs the ordeal. It's rather annoying, but easy enough to work around, I suppose.

Eh, all I did was upgrade the green peashooters to level 9, and only used them. There was no reason to upgrade any other guardian.

I wish there was a way to reset your stats, even if it cost skill points, because I can't even beat the first timed challenge.

Cute, short, fairly easy unless you're going for all of the timed challenges. Horrible, horrible font. Not only do all the m's look like n's, but all of the numbers look vaguely like 8. It didn't make a whole lot of difference in this particular case, but it's just not good to make the numbers illegible in a schmup.

Eh, all I did was upgrade the green peashooters to level 9, and only used them. There was no reason to upgrade any other guardian.

There's your problem. You need to use

for the timed challenges.

I just used the blue laser guardians set to AI 4 to breeze through the timed boss stages. It helped that I had them upgraded to lvl 9.

Uhm wow I feel like that's what happens when a bunch of people who know flash but have never played a flash game before make a game. No quiero.

I didn't enjoy having to click that darn Summon button for every guardian I wanted to deploy; and I wonder how the game would feel with using the mouse for movement and just relying on the AI for aiming at the right enemies instead of the current controls.

But overall I feel the game is unique and fun, and I enjoyed playing it.

Kudos to the developers for coming up with something a bit different.

Where is that new summon when you finish the game ?
Maybe it was just that you leveled up far enough just as you finished the game...

I could managed to beat the time challenge thanks to a bug.
Each time I changed world, I would get an empty one (no enemy) and I could build my summons. Doing the same world again and the enemies where there, and the summons I did previously too.
I think that's from my flash version.

I've found that aiming manually at the boss was more effective than setting the AI to 4 (target strongest enemy) and if you need firepower, definitly take the laser summons ;)

I forgot/missed that you could aim the guardians fire with the mouse... Still, breezed through the game - only objectives I didn't clear was the two last ones, just didn't feel like it :P

I had fun playing this and do not regret the time spent! Despite some of the gripes in the comments, i thought the game was very pretty and had a fun, whimsical style. I enjoyed the mechanics a lot. Perhaps it was my upgrade and summon approach, but I did feel like the game was a bit too easy.

Maxed out health, maxed out homing summon vampire ability. Summon 2-3 homers, and adjust the other summons based on the situation. I rarely got near dying. The lasers definitely help on the bosses (set them to ai 4, as mentioned above, and keep the homers at ai 1)

I feel this one deserves a solid 4 mushroom. Sound effects could have been more whimsical to match the art style. Difficulty settings would be cool. I also found it irritating when the eating gauge reset if I entered the summon screen while chomping (as mentioned above).

Everytime you pressed the summon button, the laser guys reseted themselves and fire again. With 6 lasers guys lv 1 Al4, using this bug can let them firing again and again in seconds. Then the bosses will be down in about 10 seconds (include final)