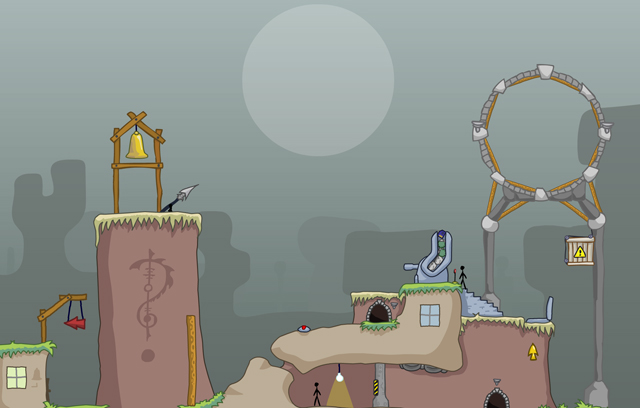 Today, we are going for a stroll back in time. Cast your mind back 12 years (yes, it's been 12 years) to 2005. What do you remember from this momentous year? Perhaps you recall the opening of Hong Kong Disneyland, or maybe you are still thankful for the launch of video giant Youtube. Star Wars: Episode III and Batman Begins were both released, as was the sixth instalment of the Harry Potter book series. In amongst all of these worldwide hits, Robin Allen quietly dropped a ton of stick-figure dismemberment on us in his hit Flash game, Hapland. We can still hear the faint sounds of frustrated players hitting their foreheads on their keyboards as their 137th attempt to successfully finish the game crashes and burns before their eyes.

Well, if you miss that sense of teeth-grinding irritation, we've got good news for you - the original Hapland has been revived and re-released for iPad! 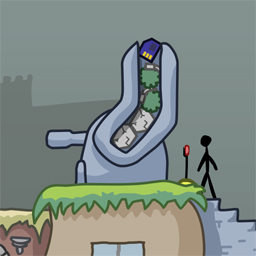 Fans of the original Flash game will recognise the set-up, and the general principle is the same - manipulate items and innocent little stick-people to make the mechanisms work smoothly and open the giant stone portal. Tap the screen to make the various parts of the overall mechanism move, but beware - if you get tap things in the wrong order or don't nail the timing, one or more of your poor little stickmen will meet a grisly death and your chances of winning will evaporate in front of your eyes. Thankfully, you can start over as many times as you can handle without throwing your iPad through a window.

I think this ganme is already on this site. Hapland 1 2 and 3 are listed if you click the tag haplandseries at the top.

@paul yes its on the site.

I may be feeling extra old.. I remember when this was first put on this site.

But if you glanced and read the article... this is an IPAD varient... and the article itself SAID that it is going 'way back when'.

Now excuse me while I go sulk in a corner from feeling old.

I wish this was on GooglePlay. I loved this game back in the day.