When people show up dead and hanging in a meat freezer, chances are "natural causes" don't factor in unless you have a very liberal definition of the words. It's murder most foul (or at least, the maid thinks so) in Grim Facade: Sinister Obsession, the new hidden-object adventure from ERS Game Studio The maid has worked for the Conti family for years, and when she stumbles across a notebook that appears to detail the murders of three women, she calls you, a local detective, in desperation. It seems like everyone's got motive, and it doesn't look like this idyllic countryside is as safe as it seems to go poking your nose around in. Will you be able to solve the murders without becoming another footnote in the bloodstained notebook yourself?... well... I have faith in you! You might not be any Jessica Fletcher, but you got this. 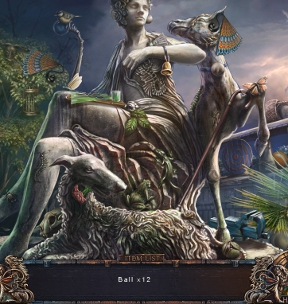 Sinister Obsession has three levels of difficulty depending on how much of a challenge you want, though the basic gameplay remains unchanged. You'll search for clues around the Conti family estate and the surrounding countryside, gathering items to solve puzzles. Make sure you keep an eye out for any gold coins as well, since money talks... or at least, can be used to buy items you'll find useful to your investigation. Click on the screen to interact, and wait for your fan to open fully to use the hint or skip functions, and watch for any fans lying about that can be saved as instant hints when you need them! Some hidden-object scenes will just have you track down a bunch of a particular item, while others may force you to hunt by silhouette and solve puzzles to gain access to other things you need.

Analysis: Okay, look. Nobody's saying murder isn't bad, but come on... there's something about solving one that makes for some solid entertainment. Sinister Obsession is packed with the usual plot twists, cheesy revelations, and, uh, plucky canine companions, and high production values wrap everything up in one pretty package. The character animations are a little... unsettling at times, but the artwork is gorgeous and the environments are packed with movement and detail that keep them from feeling like static images. 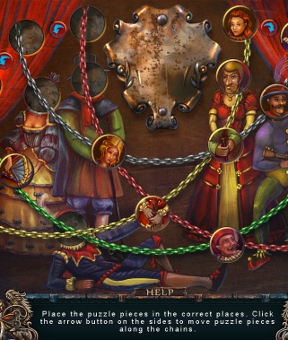 So what's the downside? Repetition, and lots of it. The game has no problem making you repeat hidden-object scenes almost back to back, so they tend to wear out their welcome fast. It's a shame, since the rest of the standard adventure gameplay is actually pretty enjoyable, if peppered by the usual nonsensical scenarios of strange items with stranger uses. There's a nice variety to the gameplay as a whole that helps keep it from feeling too by rote, but there are definitely times when it feels like the game is dragging its feet and padding the gameplay a bit.

At over four hours or so for your average playtime and packed with puzzles and corpses, Grim Facade: Obsessions is a gruesome little murder mystery that's definitely worth checking out. Diehard gumshoes may find it a bit too predictable in places, or irritated that the game occasionally doesn't seem to take itself too seriously. For the rest of us, however, who want a case packed with high camp and drama to solve along with some seriously lovely designs, will want to take a trip to Italy with it and at least try the demo on for size. So go on. You know you want to. Solve ALL the murders!

Chapter 1: Road to the Villa

Side and Outside of Villa

The poor dog is overcome by the smoke from the trash can, so you need to find a way to get the lid to cover it.

The dog will come to and run around the corner.

Chapter 1: Road to the Villa

Side and Outside of Villa

The poor dog is overcome by the smoke from the trash can, so you need to find a way to get the lid to cover it.

The dog will come to and run around the corner.