Tell me--do you believe? Believe in what, I hear you asking. Santa? The Easter Bunny? The Tooth Fairy? All good guesses indeed, but the answer Carmel Games' Escape from Potato Island was looking for was actually potatoes! Eye couldn't believe it either at first when Anthony told me his father sent him to Potato Island while his house was being renovated. Reminiscing a story from his grandfather about a magical statue near the dock of the island, he goes off in search of a sacrifice for it 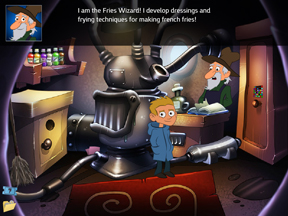 As you'll soon discover, though, not everyone is sold on the magic. One of these holdouts is self-proclaimed know-it-all and licensed tour guide Shawnacy, who casts doubt on the theory and doesn't offer much assistance. Don't be disheartened though, press on collecting items and meeting the island inhabitants and maybe you will have the chance to hear the giant potato statue speak!

A short but charming game, this conforms to the usual point-and-click genre Carmel often dabbles in. Move your cursor across the screen and click when it changes to interact with people or objects, and click on one then an object to combine or use them on each other. Sometimes, you will have to look around and backtrack to ascertain codes and solve puzzles before you can progress.

The game may be short, but as usual the colorful artwork and little twist at the end make it an entraining way to fill ten or fifteen minutes.

A walkthrough for the game, in case you get stuck. Note: The order of many steps is interchangeable - you may need to do some backtracking to find the item you need or the solution for a specific puzzle.