Goodgame Empire (free registration required), by Goodgame Studios, is the sort of casual strategy simulation meant for players looking for something to pick up for a few minutes at a time and a way to antagonize other players through good ol' fashioned siege-ery. You're given your own castle and surrounding kingdom you're in charge of building from the ground up, and it's up to you to keep your resources high so you both have enough wood and stone to build new structures and defenses with, and enough food to feed the growing army you'll be training. You'll need cash too, of course, which means building houses for people you can collect taxes from to come live in. Why, what do you need an army for, you ask? Well, you could just use it to defend yourself from and attack bandit hideouts, or you could sally forth under your new banner and sack some rubes, yo! 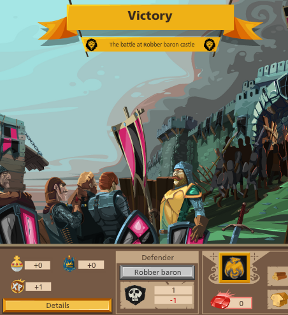 Goodgame Empire is structured like a Facebook game, in a way. You'll be given tasks and objectives by the various members of your kingdom, and completing them grants you rewards as well as expands your castle and the things you can create. Everything takes time, however, so you'll either have to wait for an objective or order to be completed (which can be anywhere from seconds to hours of real time), or spend rubies to finish the task instantly. Rubies are granted as you level up from experience gained completing tasks or found as treasure, or you can spend real money through microtransactions if you're impatient, though it isn't necessary to play the game. Though it seems simple initially, running your kingdom quickly becomes more complex as you have to expand your land, develop and assign you defenses, recruit and train different types of warriors, and more. Fortunately, the game's helpful advisors will walk you through everything every step of the way. 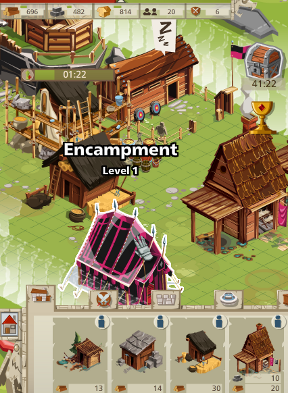 Goodgame Empire walks the line carefully between casual and simple, with gameplay that's less challenging than it is simply involving. The time-based construction and objectives won't be for everyone, since it means you both can't really play for long stretches at a time, and you're forced to check back frequently to make sure everything is in good working order. At the same time, however, unlike a lot of games with similar gameplay models, Goodgame Empire not only offers you a lot to do and has a surprisingly high quality design, it doesn't nag you to spend money on it, or feels like it's trying to force you to do so by ridiculously padding the costs of things in game. While it's true to get the most out of it without paying you'll want to be playing frequently and for a long time, there's a surprising amount of things to do and see to keep you doing so. Random encounters with highwaymen you can bribe or battle, research trees, regular treasure discoveries and rewards, artifacts to forge, new kingdoms to travel to, and more ensure that there's a lot to do.

Though you are protected from being attacked by other players for seven real time days once you start playing, it's sort of disappointing that you can't choose to play only single-player if you aren't interested in competitive play, even if it were made a permanent choice. The game itself doesn't really have much of a story beyond "get bigger, smash everyone else!", but its beautifully drawn with colourful style. Chances are you'll find it still gets a little repetitive, especially with a lot of its content locked until you reach staggeringly high levels, there's still a massive amount of content to be had, and what feels like an impressive focus on quality. If you're looking for an engaging casual simulation that fits into your spare time with enough to keep you busy for a long time, Goodgame Empire is definitely work checking out.

This article has been deleted and rebuilt in an effort to clear an error in our online flash portal! (We're unable to get the game to show up in our portal listings.) Please post your comments again! We apologise for the inconvenience.

DO NOT PLAY THIS GAME! EVER!

If you value your sanity and your wallet, do not play this game. Money wise, you're fine up until you hit level 50 or so, that's when every starts to go wrong. Most people above lvl 50 are either ruby buyers or those under the protection of ruby buyers. But that is not the worst of it.

The absolutely most despicable thing about this game are the people that play it. EVERY. SINGLE. BIG ALLIANCE is full of nothing but bullies who make you set up your stuff their way if you want to be a part of their alliance. I switched to a big alliance yesterday and when it was moving toward them telling me how to play my game, I firmly, but politely explained that I do not take kindly to dictatorship and that I had no problems leaving. The leader called me mouthy and "nicely" said "play my way or gtfo". You can't swear or even call someone an idiot in a message.

Not only that, but most of them follow a set of imaginary rules that new players couldn't possibly know about, such not attacking outposts. (Long story, short, I was harassed and had to move my castle halfway across the map.) Many of them do not follows their own rules. One of my outposts was attacked yesterday by a player 20 lvls ahead of me. It had 160ish, attacking, not defending, ATTACKING soldiers in it and he sent over 1,200. I messaged him a couple of times and told him to "grow up" after he respond like a child. He then attacked BOTH of my other two outposts. At this point, I'm done with this ridiculous game.

There is absolutely no honor, dignity, or sportsmanship in this game. If you do anything, ANYTHING, that a strong player doesn't like, they will have no problem making sure you know about it... by burning your castles to the ground.

Obviously, those who spend real money on the game should have a slight advantage, but the way this game is set up, you will absolutely NOT get much passed lvl 50 if you don't spend money on it. There are constant pop-ups trying to get you to buy rubies for rewards and they don't have ANYWAY for free users to earn some stronger stuff like most games do.

I give this game 2 years before it ends up shutting down. My little area of the map has lost a lot of players and I know it's happening in the rest of it too. This is because of all that I mentioned above and in my original comment. At some point in the near future, there will pretty much only be lvl 70 players who sit around doing nothing because they can't win any battles against players their own strength. That will lead to a sharp decline in goodgame's income because no one will need to buy many rubies since they won't be doing much. I've seen it happen before and it's happening here. More proof, I've noticed in the last couple of months that they're pushing players even harder to buy rubies than they did when I started. If that's not evidence that Empire is already swirling the drain, I don't know what is.

I'm posting this on every review site for Empire I can find.

Absolutely terrible! This game is full of bugs, has severe lags disrupting game play several times every day, and drops your connection out of nowhere.
Customer service is extremely poor. Their staff is rude to the customers accusing them of lying and attempting to cheat the system when they ask for things lost due to lags and bugs. There is no support on weekends, there have been several people who haven't gotten responses at all to tickets, and it averages a week to get a response. Even then, most often the expect proof they know we can not come up with. We do not screenshot our every move!

Players are leaving in droves. Do not waste your time on this one. You will be sorry and wanting your time back.