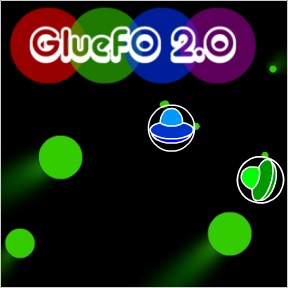 GlueFO 2.0, from the irRegular creators of Sproing Reloaded, has a simple premise: what if the heroic ship in Asteroids couldn't afford ammunition? What if the global recession were in fact galactic, and the only way you could afford to bust space rocks was by gluing drifting pebbles to your hull, and then spraying them at the asteroids like deadly gravel?

That's basically the whole game—fly your sticky self into the teeniest asteroids, and fire them at the bigger ones. Use your bonus points between levels to buy power-ups like the tremendously useful Orb Vacuum and the surprisingly pointless Rotational Thrusters. Move your ship and fire with the mouse, activate your upgrades and expendable weapons with the keyboard.

Improvements on the first GlueFO include lots of new power-ups, a creative set of challenge stages, and not one but count 'em two survival modes. My favorite gameplay addition is the evil GlueFOs, who will chase after your own ammunition and rocket it at you with pants-wetting accuracy.

Due to the generous (but non-refillable, mind) life bar, this isn't a horribly difficult game. However, if you're the sort of player who likes a stronger sense of achievement, then you are still in luck. Guess what else you get in GlueFO 2.0. Go on, guess! Achievements! You get achievements! Yaaaaay! Everybody gets achievements!

I can't see to turn the ship like all the enemies can ... anyone know how to do this or is it just not possible? (maybe I'm just overlooking it)

Buy the Rotational Thrusters in the shop between levels. Then you can turn left and right with the A and D keys.

This game is fun, and I do like the achievements. Does anyone ever buy the bombs? I find them rather useless.

Also, this is probably the wrong place for this, but I can't find any "Contact Us" link or something. Jay, my Casual Gameplay account (Fuzzyevil) seems to have been disabled for some reason. I can't log in.

Small bombs can be useful in clearing last small orbs from the level or at the very beginning of level after you have broken 1 or 2 of those huge orbs to small orbs so you can get a lot of ammo.
Bigger bombs are useful only in a few levels where there are no evil gluefos...

Hidden award? Anyone know how to get it?

For the hidden award:

Move your cursor to the top right corner. You should see a black square that doesn't change colour, even though the cursor placement is lighting up the other pixels. It's above the column of awards beginning with "Orb Split 3", and above the word "Awards". It's easier if you move your cursor quickly over that approximate area, because the colour takes time to fade out and you can probably see the black square.

An easy way to get the hidden award

Hit the tab button, then click in the yellow square!