Persistence is a virtue. Even in the face of overwhelming odds, it's important to buckle down and climb that next hill. It's especially important to remain persistent when a sadistic robot is forcing you to compete in some twisted, deadly obstacle course for his own amusement. Yes, the action platform game that is Massive Monster and Tasselfoot's Give Up 2 is all about plugging forward through each increasingly dangerous room, avoiding spikes, lasers, missiles, invisible walls, and the constant nagging of your robotic tormenter. Use the [WASD] or [arrow] keys to move and jump from your entry tube to the exit door. Reflexes are key. And remember, death is no release, if you bite it you're starting the level again. There's a big shiny "Give Up" button on the bottom of the screen just begging you to press it. But you're not a quitter, are you? 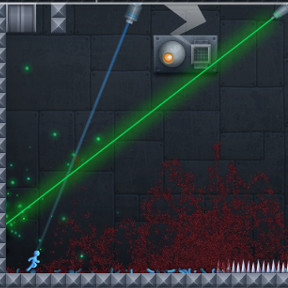 Give Up 2's got a bit of a Portal vibe to it, what with it having a snarky robotic overlord dangling the cheese for you as you scurry through its increasingly elaborate maze. That's a complement, by the way. There's something so utterly appealing about surviving the daft machinations of a psychotic HAL 9000. The controls are tight, with fluid motions and responsive double jumps that make all the dodging and jumping a gleeful exercise in failure. The difficulty ramps up quick so bring your A-game or risk witnessing your blue little guinea pig get splattered across the walls and floor in a beautiful physics-y display. It's almost as much fun to die as it is to succeed in this game. The sound work, likewise, is top notch, featuring some fantastic voice acting from a talented cast that manages to be genuinely funny in their annoyingness. Are there downsides? Well some of the particle effects might cause a touch of lag on weaker machines, and if challenge isn't your cup of tea than you might not make it past the first quarter of the game. In the end, Give Up 2 is a game for thrill-seekers, masochists, and those among us who keep pushing no matter what. So, crazy people, basically. Check it out.

This is kind of like Achievement Unlocked, except with fewer ... achievements. And even yet still more dying.

Sorry, dashing up and down like mad to try and find invisible platforms and walls - and dying about 99% of the time - nope, still not my thing :(

While being frustrated by level 30, noticed something that makes this unnecessarily more frustrating. The traps don't reset to their initial position on death. So that's why sometimes I seemed to barely run avoid traps through half the level, but other times I die at random positions. I beat it eventually, but that's not good design. I should be able to beat the levels by muscle memory.
...Or maybe it's intentional.

Still had some fun speeding pass through the traps (eventually). But the concept of level 31+ doesn't work for me. Gave up at level 32 out of boredom. I did try, but wasn't even close to beating it, so I have zero chance for level 40.

The traps do reset upon death. Every run, however would vary greatly depending on when the missiles and/or the rhinoceros are triggered.

The missiles are synched to launch periodically with every turret fire, but only if the launchers can see you. Time your runs in between turret firings so that the missile launchers don't see you when the turrets fire.