Gibbets 4, a physics puzzle game by Hypnocat Studios, is a terrible game for terrible people. Not, of course, that the game itself is poorly made or inherently bad in any way, or that you yourself have to be in order to enjoy it... but it helps! In theory, the premise is honorable. You've got a bow and arrow you can click and drag on to aim and fire, and you're aiming to not only take out any overzealous hangmen in each stage, but to rescue each unjustly hung soul with a well-placed arrow to sever their noose before their health bar runs out. If you miss and accidentally take someone's eye out, and therefore a chunk of their health, you're supposed to be duly horrified and not laugh like a deranged hyena. ... I feel like just typing this game's description and my reaction to it is putting me on a government watch list somewhere. I mean, look, I made that banner specifically so you know I tried to play it the right way. See? It just... didn't turn out so smiley all the time. Or upright. Look, I may not be the hero they need, but I'm the hero they deserve, okay? 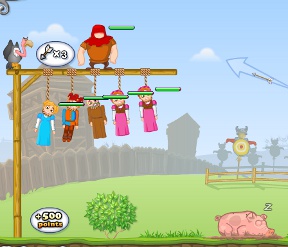 Gibbets 4 is essentially a fairly straight-forward game, though there are orbs you can shoot that will then shoot out an arrow themselves in a specific direction, as well as score multipliers, extra bonus arrows, teleporters, and more. In general, it's all about timing and aiming, and it does a fine job of being challenging in its execution without straying into the realm of obnoxiously difficult. It's not exactly a concept that's been breaking new ground, but there's something weirdly compelling about simple archery aiming games, which is why titles like Apple Shooter have gone on to spawn so many variations on the theme. What's nice about Gibbets 4, however, is how many funny little touches there are in it, from the way you can take a shot at sleeping pigs and other things in the environment, to the hidden achievements you can get to just messing around. It's gallows humour in the most literal sense, and while some players won't like the gore, the rest of us will find something amusing in the way a fellow can take an arrow to the head but still land on his feet with a shaken smile. No, it's quite alright! I'm fine! Just a flesh wound! Simple as it is, some of the levels are wonderfully constructed to pull of some ridiculous shots and chain reactions, making Gibbets 4 the sort of silly addictive diversion coffee breaks were made for. Just don't let your boss see you playing it. Not because you should be working, but more because looking up from a computer screen with a grin after you just shot an old man in the kneecap tends to call for visits to human resources and "sensitivity training".

Someone know why next to all 2d-box games are made by russians ? Google doesn't seem to give the answer.

Anyone know how to get them??

visit the credits screen and click on the graves.

Orcs vs Humans : have a look at what you can do with the sheeps on the "level map"

Missing One Achievement
*Excalibur
Any Help?

5,032 Views
7 Comments
chrpa— Jayisgames needs your help to continue providing quality content. Click for details We escapists got our first Christmas present, a new game from Masa - and it's great! You find yourself in front of an elevator, which you'll get...  ...