Ghosts of the Past: Bones of Meadows Town

Mysterious women appearing out of nowhere in front of your car on dark, rainy nights? Rarely a good sign. In ERS Game Studios' new hidden-object adventure game Ghosts of the Past: Bones of Meadows Town, you play a sheriff with the world's corniest sense of sarcasm sent to Meadows Town to investigate the murder of a local teacher and the disappearance of the last sheriff, which wouldn't seem to bode well for your quip-makin' butt. Aside from a sassy Viking sign, the town doesn't seem to have much going for it after you arrive despite the best efforts of an apparition to make you crash. In fact, apart from a skeleton who wants to axe you a few questions (just think, I get paid for this) and a deputy who must have been hired for his golden waves of hair since he clearly can't shoot worth a Stormtrooper, this place looks almost deserted. Seems like the townsfolk have all evacuated from the bad storm rolling in since they believe all of this is being caused by an angry spirit said to be the guardian of an ancient treasure. What follows is easily one of the most over-the-top gleefully campy, over-dramatic, absolutely insane adventures to come along in a good, long while. Jump scares! Corpses in top hats! Ominous obstructing balloons! Don't think about it too much... just throw up your hands and go "WHOOP WHOOP WHOOP" Zoidberg style along with the game and you'll enjoy every minute even if it ends with a pfffft rather than a bang. 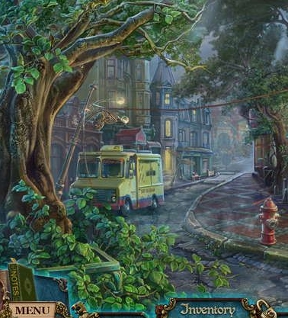 For the most part, the game plays like a standard casual hidden-object adventure, which these days means of course it comes with the typical handy instant-travel map, a fully customizable difficulty setting, and the obligatory ability to switch to "puzzle mode" when playing hidden-object scenes which actually allows you to play a weird form of Tetris instead of searching for items. The two main things the game adds to its mechanics is a supernatural device you have to charge with mystical energy to banish spirits, and an evidence board you'll need to place all the clues and information you find on in order to connect everything together. Largely the magic doohickey fails to offer anything to the game since all you do is pan it over the scene until you've found and clicked on all the glowy purple stuff you can find. Likewise, you can find runes to "decode ancient prophecies"... which are mostly just silly sayings that either tell you things you already know, or just spout random "wisdom" like "don't antagonize spirits". The evidence board is a nice idea since the plot has so many twists and double-crosses, but the placement of clues is so clunky you won't enjoy connecting the dots as much as you like. The hint function is also not as helpful here as in other games, but on the whole, Bones of Meadows Town is actually easy enough that you might only need it to figure out where to go next. Item usage tends to be surprisingly logical for a game with a chainsaw-wielding viking with knockout dust, though there is an awful lot of backtracking in the latter half of the game. 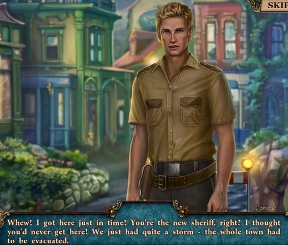 Though the artwork is gorgeous and areas feel alive with detail and spooky little flashes that add a lot of character, the voice acting is sort of touch-and-go... since when is Loki pronounced "Low-keye"? Also suspect is the bemused, Ned-Flanders-y tone your deputy friend reacts to everything with, sounding almost bashful and good-gosh-darn-it about absolutely everything in a way that becomes unintentionally funny. It's deliberately tongue-in-cheek and stronger for it, as seeing what the game comes up with next is always surprising. There is a scene where you (poorly) dress an unconscious man in front of a bar as a puzzle, for crying out loud. You need a special cookie to open a secret lock! While some people might find all that a bit much, with the relentless tide of super serious and comparatively "darker" casual adventures, Ghosts of the Past: Bones of Meadows Town is actually quite refreshing for how much it seems to revel in its zanier elements. We are talking about a game where the town coroner lives in a house with a mechanical fire-breathing dragon on top of it.

The ending is almost bafflingly abrupt, and despite wrapping up the main story, it still feels like the "bonus" chapter in the Collector's Edition should have been part of the main game. Bones of Meadows Town doesn't quite feel like it manages to string all its weirdness together, and in fact the more straight-laced latter half of the game is nowhere near as engaging as the first due. Despite a low difficulty level that means most players will speed through it in around four hours at the very most, it's well worth checking out if you want something that doesn't take itself too seriously and does everything it can to keep you entertained along the way.