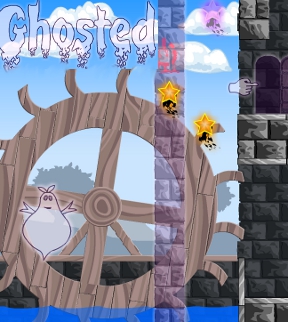 The spirit will literally move you in yolzii's physics puzzler Ghosted, where you play a host of ghouls with a passion for possession. Your task is to get the ghosts out of each level, collecting all the stars, but since they can't interact with anything non-ghostly purple that makes up the physical world, being all non-corporeal and whatnot, you need to have them snag powers that will allow them to take control of objects to move. Different icons floating on the screen grant different powers, like being able to turn mechanical constructs on or off, or hop around, and once you've clicked on one to pick it up, click on an object to possess it and then select the appropriate action from the wheel that appears. Plus, later levels will allow you to control multiple spectres, swapping between them simply by clicking, using them together to cooperate to get past tricky challenges. Aw. Friendship is magic.

Physics puzzles are a dime a dozen, so yolzii's attempt to breathe some life (... uh, so to speak...) into the genre with a bit of creativity is particularly welcome. Ghosted is a clever game that plays with its concept in interesting ways, though it takes a while to really get going and provide some challenge. The downside is the game might almost pile on too many elements, from powers to switches and machines, and the few times it forces you to use your jumping ability to do a bit of platforming are obnoxious enough to highlight that the game is best when left to pure puzzling. Despite that, however, Ghosted is still worth checking out. You can feel the thought that went into crafting it and trying to do something different, and once the initial tutorial levels are past, the game really spreads its wings... er... sheets... whatever!... and makes for a cute, clever coffee break of a game you'd love to see polished and expanded on in the future.

Mechanics were just a little too complicated for me, but I'm only on my first coffee, so will try again later.

Thought I ran into a glitch regarding ghost Mary, but it turns out not:

Mary's ability is to turn mechanisms like the water wheel on/off. However, to do so, she has to inhabit the mechanism itself (not any other object). This might seem really obvious to you, but when playing Level 5 for the first time, I kept trying to use her ability when Mary was in the rock, and thought it was some kind of glitch when the Power On button just wouldn't appear on her pentagram of options. Turns out I had to inhabit the water wheel itself, then jump into the rock once the wheel was on.

Decent game, but controls need work. Having ghosts inhabiting items that are side by side makes for precision clicking, and frustrating results if you don't. Also, if you manage to get an object all the way on the left side of the screen with Mary in it, you can't get her back out since the exit icon is now off the screen, very annoying as I was trying to finish level 21.

Ooh, sounds rather like Ghost Trick, but since that is my favorite DS game ever, I'm willing to give this a try.