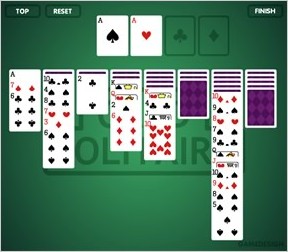 Who doesn't enjoy playing card solitaire now and again? There are many varieties of Solitaire—or Patience as it is called by British folk—and most involve the dealing of cards into a set pattern on a table, which is then used by the player to order the cards by rank and by suit constrained within a set of rules defined for the game.

This is quite similar to rules of play for the latest Game Design Flash game, Card Solitaire, with the exception that all of the cards are dealt into eight (8) piles instead of seven (7); and there is no waste pile. The player moves face-up piles as in Klondike, alternating red and black suits while placing lower numbered cards upon higher numbered cards, except that the entire face-up pile need not be moved altogether. Click and drag any face-up card to move it and any cards below it. The game is won by moving all of the cards of each suit onto its corresponding foundation, starting with the ace of the suit.

Game Design's version of the classic card game is quite intuitive and I found it extremely easy to jump right in and play. The rules seemed natural and straightforward, and the drag-and-drop interface was just as intuitive. Sometimes a click-drag did not seem to grab hold of the card as expected, though the occurrence was infrequent and didn't affect my overall enjoyment with the game. A minor complaint to an otherwise elegantly simple implementation of a classic, and one that may just be the right deal for you.

Well, I've just spent the past far-to-long playing this game, and have come to the conclusion that the game design is broken. I came to this conclusion because despite having played many, many rounds, I never won once. even after I got used to the mechanics, and adapted my play style, I still was stopped by the fact that only kings can make new columns.

Invariably, I'd get four marvellous stacks of cards all neatly in order, except for the one errant card that was covering up the one or two cards that I needed to finish, and there's nothing I can do about it, because there's nowhere to move that card to.

So in the end, it seems to be more about the luck of the deal than the skill of the player. I have this same complaint with Klondike, too.

Yes, I agree that it is hard to win, though not impossible. I have won a couple of times out of, oh, about a dozen games.

a couple times out of a dozen? You're either profoundly lucky or profoundly brilliant, or I'm the complete opposite of one of those two.

I've tried about 20 or more times and haven't won once. It seems to involve a tremendous amount of luck. Every game comes down to looking at the top card in the column, looking for a card to put said card on, realizing there isn't any such card on the table, and thus no matter how hard I try, it's literally impossible to progress any further.

That happened every single game so far. It's fun, but also super frustrating.

It is a hard game, but not undefeatable. I finally passed it after a couple of tries. You've got to plan you moves ahead and know how one movement is going to affect your next ones, like three or more in advance.

There is no point generating a random game in this which has all of the front cards the same colour, and no aces which reveal cards of the opposite colour. Just don't do that :)

Hidden aces (there may be other cards this applies to) cannot be clicked on to reveal their suit. This is quite a problem in a game which requires some forethought.

Otherwise great, I really like the interface; I found it responsive.

hah - third point. This game is made easier by the fact that you can drag ANY visible card, regardless of what is on top of it. Didn't notice that to start with :) And that invalidates my first point lol

This is an old game called "Russian"...and it's very difficult. It's supposed to be. It's one of the hardest variants of Solitaire - only those with strong stomachs should play. ;)

I've been playing it since I was a kid, and I love seeing online versions of it. Thanks for the link!

Ahhh, THAT was my problem! Thank you, WobL. I should have read the review more closely. :)

You can drag any pile to another pile as long as the bottom card can play there. For example, if you have one pile that is 6s,5h,5s,5c,2h. You can pick up that pile at the 6s and drop it on any open red 7.

Thanks for that Dr. Pangloss! I figured it wasn't an original design, though I couldn't say I had ever played with rules like it before.

Scott - I tried to mention that fact in the review, but I realize now that my description was a bit vague. Cheers!

Beat it the first time I played it, without looking at the comments.

I get the worst feeling that this game is mocking me. I've played four games so far, and I've only seen two tens in just the fourth game: Hearts and Diamonds. Problem was, I had no black Jacks out. Frustrating, but addictive.

i completed this game within 10 tries

This is Yukon, not Russian solitaire. The
tableau columns are packed in alternate
colors (as in Klondike), not in suit.
Win rate should be at least 1 in 3.

No excuse nowadays for not having numbered
deals.

It looks like this game has gotten a graphical update recently.

Hey I have done it a few times as well, you have to think outside the box and move things you think you shouldn't move :) good luck!