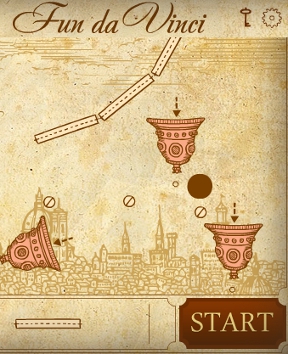 Leonardo Da Vinci. Renaissance Man. Painter. Sculptor. Scientist. Ninja Turtle. A man whose insatiable curiosity permeates every one of his many works. Perhaps the most intriguing are his plans for inventions never built: obvious prototypes for such modern inventions as the parachute, the helicopter, the tank... even a humanoid robot. However, it's only in the year 2011 that the most impressive of his plans were discovered and released by one team of developers in the form of Fun da Vinci: yes, it seems that Leonardo was the inventor of the physics puzzle, and the world of casual gaming is all the better for it. Thank you, Nikita Sidorenko, Semen Khramtsov, Alexander Kucherenko, and Vladimir Marinichev! You've done your gaming community a great service.

Each level of Fun da Vinci features a cannon that shoots balls and an urn into which you need to guide them, along with a "start" button that starts and stops the simulation. Using the mouse, you drag and rotate objects into place, including platforms, gears, and trampolines. The yellow objects are affected by gravity, and the transparent ones aren't. In any case, once the cannon starts firing you'll quickly see if everything has been placed correctly. There are 27 levels to play, and it seems something will happen to that clock on the level select screen, should you beat them all...

Analysis: The greatest complaint that people have about physics games is that, at a certain point, they just become indistinguishable. I can sort of see their logic: after all, as much as I enjoy putting together Incredible Machines, I can only take so much bouncing and rolling and accelerating at 9.81 m/s/s before it all runs together in my mind. In the actual mechanics of the physic puzzles, Fun da Vinci does feel familiar in concept, but it has style to spare. Fortunately, it's also got other qualities. Solid? Certainly. Fun? Absolutely! The gameplay makes ample use of different elements without feeling gimmicky, and offers the sort of "planning is not optional" gameplay that high-score enthusiasts will get a lot out of as they try to complete each level as efficiently and quickly as possible. 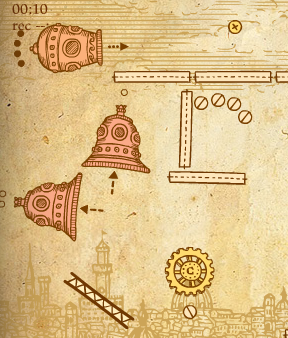 From the sepia user interface, to the goofy portrait of Leo that adorns the title screen, to the gearbox of the level select, to the crackly parchment of the actual play-screen, Fun da Vinci truly feels like a game played upon a long-lost secret Renaissance notebook. The noise of scribblings dominate the soundtrack, as well as the ambient noise of a Italian villa... A lot of effort has gone into making it seem like you are at the drafting board of a true polymath. Victory brings a catchy fanfare, and one of a number of quotes from Leonardo himself. Failure is easily reset with a click (though I did enjoy the crashing and yelling sounds that occur when a cannon ball etc. falls out of frame).

What I liked best about Fun da Vinci is that its invocation of Leonardo doesn't seem mere gimmickry. Perhaps I read too much into it, but the game comes off as a sincere tribute to a historical figure, and I like to think that sincerity was intentional. Certainly it is a light-hearted tribute, but that's appropriate: the quotations that postscript each level show that Leonardo very much had a sense of humor about his work. Fun da Vinci's genuineness counts for a lot, and, as a result, I'm sure the game will leave you smiling like La Gioconda.

Well you know what they say, it's all fun and games until someone gets their ear chopped off.

That was the joke.

A good game. Usually it was kind of obvious what to do (three balls drop in, now figure out how to make the fourth go in as well), but it does tend to get fidgety towards the end (level 16 seems like pure luck, and levels 18, 23, and 25 require near pixel-perfect accuracy).

Oh, and when you're done

Nice game, decent controls, but a bit too easy and short.

I really liked this game and wanted more levels. (I don't agree that some levels needed pixel-perfect accuracy.)

The game was great but how do I erase the completed levels and play again from the beginning?

6,469 Views
4 Comments
chrpa— Jayisgames needs your help to continue providing quality content. Click for details Rinnogogo in their newest game return to a melancholic, bitter-sweet story they are so good at. Your old grandma, lying in a hospital, forgot something very important at...  ...

150 Views
0 Comments
jayisgames.com— What to Study and Do from High School, Before Submitting a Resume People with good problem-solving skills, math ability, an eye for art, imagination, and good problem solving and programming skills are on the right track...  ...

9 Views
0 Comments
jayisgames.com— Nintendo games are an absolute gaming delight that every console gamer craves. The latest releases of this platform are a complete package of thrill, adventure, and excitement, no doubt about that, but the retro games launched by Nintendo are...  ...