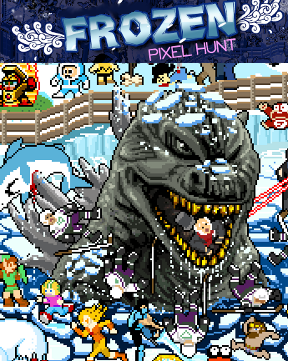 Death Ink's incredibly detailed winter-wonderland-gone-wrong serves as the setting for Frozen Pixel Hunt, a tongue-in-cheek hidden-object game where you hunt down and click on various characters from pop culture history with a seasonal twist. Like Sean Connery and his futuristic red mankini. Or Bill and Ted. Or stupid, sexy Flanders. They're all together indulging in some winter mayhem, but it might take you a while to hunt them down in all the carnage and chaos. Since there are 173 characters to find, you'd better get clickin'.

Death Ink's art is so amazingly thorough and complicated that it's a shame the (admittedly itty-bitty) violence and blood means this isn't one for the kiddies, since it's seriously impressive to look at. Some of the characters are fairly iconic, like Spidey's long-time villain Venom, but some might require a Google or two before you can figure out just what you're supposed to be looking for. Even then you might struggle if you haven't seen the movie/played the game/seen the cartoon/and so forth in question to provide context. The design is all fairly simplistic, yet detailed and arranged enough that even the characters without instantly recogniseable designs when shrunk into pixel form, like Ralphie from A Christmas Story, can be picked out from situations and props. Frozen Pixel Hunt is a very simple, very twisted little version of Where's Waldo, but one that reads like a love letter to pop culture, and definitely worth admiring.

He spelt Dethklok wrong, so I spent a good thirty minutes looking for Deathlok, the marvel character. :(

It would be helpful if the characters/items you correctly tag were marked somehow -- maybe darkened or turned to greyscale.

@Paul: The game comes with a walkthrough - there's a clickable button on the top left.