[Note: Please be warned that this game contains scenes of intense violence and gore, and deals with subject matter that may be upsetting to some.]

Little Fran Bow, the star of Killmonday Games' indie horror point-and-click adventure title, can barely remember happier times, even though she's still just a child. Following the brutal murder of her parents, she's locked away inside the Oswald Asylum mental institution for children, where therapists and new medicines try to help her unlock the secrets of her past so she can heal... though Fran insists she's fine. All Fran wants is to figure out who (or what) killed her parents, and find her beloved cat, Mr. Midnight, though she's not allowed to leave. But since when have the rules (and a foreboding dream or two) ever gotten in the way of anything? You quickly discover that there's something very wrong in the Asylum... through the use of her pills, Fran can see the monstrous shadows that loom over everyone, and it seems like the other kids are aware of them too, though they can't escape them. Fran stages a daring escape, but the world is dark and full of danger, and while horrific visions and creatures plague her every step, including the horned beast that taunts her dreams, Fran pushes onward. But is she ready for what she may find even if she survives? Nightmarish, darkly whimsical, and creatively perverse, Fran Bow is an engaging game with an inventive story and characters... if you can stomach it. 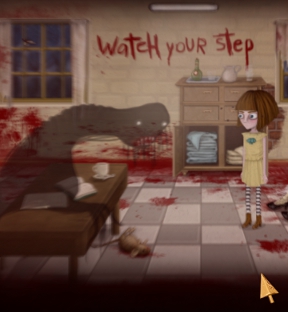 Fran Bow plays like your typical point-and-click adventure game, which is to say you point your cursor at things, and click on them to interact. Sometimes they might only be something for Fran to make casual observations about, while others can have more useful functions. Any items Fran picks up can be found by opening her purse in the bottom left corner, and then clicking the "use", "examine", and "combine" buttons to try to find uses for her inventory. When she finds them, Fran's red pills can be used to shift reality... a nightmarish prospect, but one that can let her discover new secrets or clues in her surroundings. If you want to go back to the "normal" world, well, just pop another. (Gee, what harm could ingesting vast quantities of an experimental drug possibly do to a child who's already had one bad reaction to them?) Most of the puzzles you'll encounter require you to know when and how to use the right item, or how to combine what you've got into something that'll do the job, but there's a solid amount of other types of challenges for you to solve around the way as well, so always watch for clues. The game makes use of an autosave-only save system, but if you close the game and choose "continue", you'll pick up right where you left off. 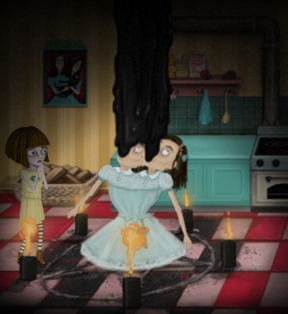 Fran Bow is, of course, an extremely dark and morbid game, but it's also at its best when it's focusing on the core story instead of being shocking for the sake of being shocking, and when it buckles down on Fran's story, you can't help but want to know more. Though some dialogue options are oddly worded so that it can be hard to tell what Fran will say or do, Fran Bow is still absolutely chilling. The imaginative and unsettling design is constantly surprising, while the story keeps you guessing throughout. It's by turns darkly whimsical, weird, and pitch-black morbid, and Fran herself is just as sympathetic as she is strange. She's a creepy little kid, one who's been through horrible trauma and yet still maintains an oddly upbeat approach to many of the things she encounters, prone to cryptic musings about the things she sees. You spend a lot of time wondering whether she really is crazy, but even that doesn't necessarily explain a lot of the things you see and learn. The artwork is fantastic, lending a lot of macabre life to its expressive characters, and the environments are chock full of things to examine and cringe over. While there are a few jump scares, Fran Bow is more interested in making your skin crawl than trying to make you leap out of it. 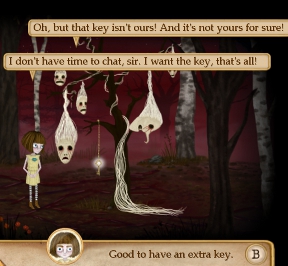 Most of the puzzles are actually surprisingly logical, even the standard adventure-game fetch-quest ones. You'll still need to combine items into weird jerry-rigged solutions for your problems, but most of it is rarely outlandish or unreasonable, and the game gives you little nudges through dialogue or other clues as you explore. Of course, there are exceptions, like the more obtuse "find a blue rose" objective in a certain chapter whose hints are too vague and coupled with hotspots that are only interactive at certain times. It is, in other words, intuitive until it isn't, though despite that occasionally rearing its head and some quests that drag on too long, Fran Bow keeps its gameplay interesting. Find a comb to disentangle severed heads in a tree? Craft a magic recipe to bewitch your captors? Sounds like a good time to me. While there are minigames, like a maze that requires you to move quickly to dodge shadows, they have an optional skip button, which is a nice touch. It's just too bad you can't skip that obnoxious gear puzzle in the second act of chapter two.

The story, as you might expect, gets pretty convoluted, with a lot of made-up terminology tossed around, and the big info-dump midway through the game changes the tone of things a little. The whole thing is extremely heavy on symbolism, some aspects more subtle than others, and while the ending doesn't necessarily quite tie everything together in a neat bow (heh), the journey itself has so many twists and strange encounters that it's worth taking. There are five chapters in all in Fran Bow, and while your playtime of course will be affected by how difficult you find the puzzles, it's still likely going to take at least four hours or more to play through. While a lot of it might be uncomfortable to watch, if you like your horror gory, grimy, and under your skin, Fran Bow is a grotesquely gorgeous indie adventure with a ton of creativity and talent behind it that can creep you out and pull you in with equal measure.

For anyone concerned with content, please be aware that this game not only features very explicit, heavy violence and gore, but also

makes a lot of references to child sexual abuse and suicide.

Soem puzzles can be annoying and its just the problem of all classic point-and-click games, when you can't understand what to do with things in your inventory.
Id give this game 3 out of 5.

stuck in this game and need help.

what should i do now?

Hi there! I'm not really sure where you are based on your descriptions.

Have you gotten the piece of wood/door off the junk pile at the start of the chapter? Combine it with the glued doorknob to make a door, and use it on the well after you've broken it open. Use the key to open the door.

I'm stuck at the chemestry puzzle aboard Itwards ship. I've used the chemicals accordingly and the two loose hoses that were there. Please help!

Take your pills and look for more hoses in the same room. Use the wall manuals.

Thanks, I did look up some help on the Steam forums, and solved the puzzle exactly as you said, and completed the game. Thanks! :)