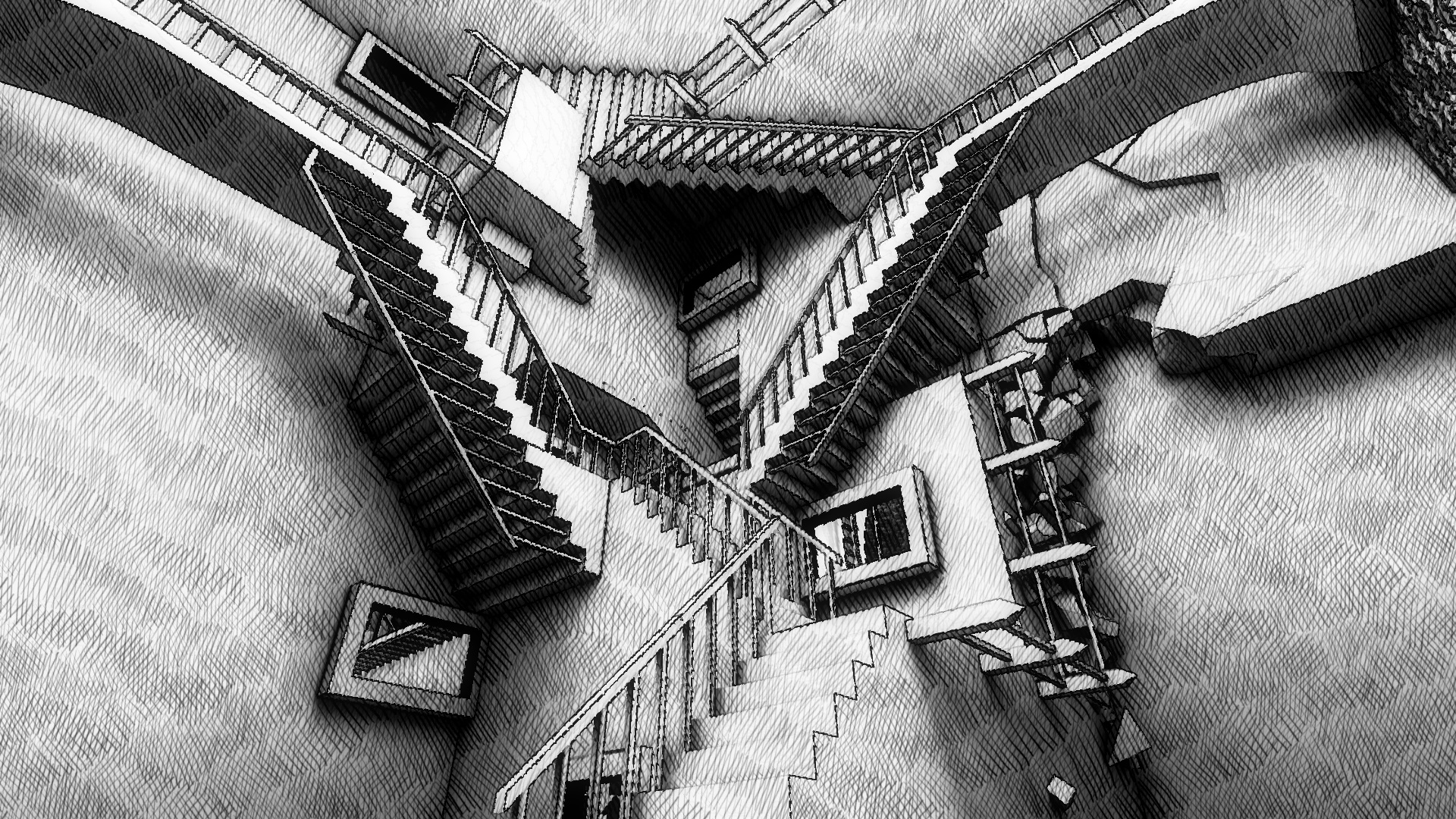 Perhaps the word "mind-bending" is bandied about a bit too much when it comes to puzzle games. Nevertheless, I have the feeling that Nusan's Fragments of Euclid might be as worthy of the accolade as any other contender.

If you're not familiar with Euclid, he was a Greek mathematician known for being the founder of geometry. And boy, there is quite a bit of it in this twisted world of staircases and all sorts of geometric patterns that fold back on themselves. The game starts you off in a simple tutorial to introduce you to the machinations of this new geometric world. Despite there being little color and mostly shades of gray other than the occasional blue object that you can maneuver, the world is anything but dull.

Fragments of Euclid is refreshing in the sense that it doesn't hold your hand too much (at least, in the original version). You're thrown straight in, and though the tutorial/entrance might proceed without too much trouble, Nusan will soon stretch your imagination with subsequent puzzles. There are four different puzzles for you to crack, with a variety of techniques required - from following the right mirror image to manipulating cubes and pushing buttons in just the right way to progress.

If at this point you're imagining waltzing through numbered doors, one through four, then you're in for a bit of an additional surprise. Instead, you'll need to scale an intermediary level known as "Transfer." By jumping through (admittedly rectangular) hoops, you'll position yourself to dash down a walkway and explore the environment for one of the four puzzles. You'll know that you have completed the puzzle when you reach a lever, and triumphantly interact with it to flip it on, activating one of the four targets down below. Another really neat facet of this worldbuilding is how you are often placed at the top of your finished puzzle and given a birds'-eye view of the completed product at that point. It's a nice feeling of satisfaction to look down at the vanquished puzzle, and see everything click into place. 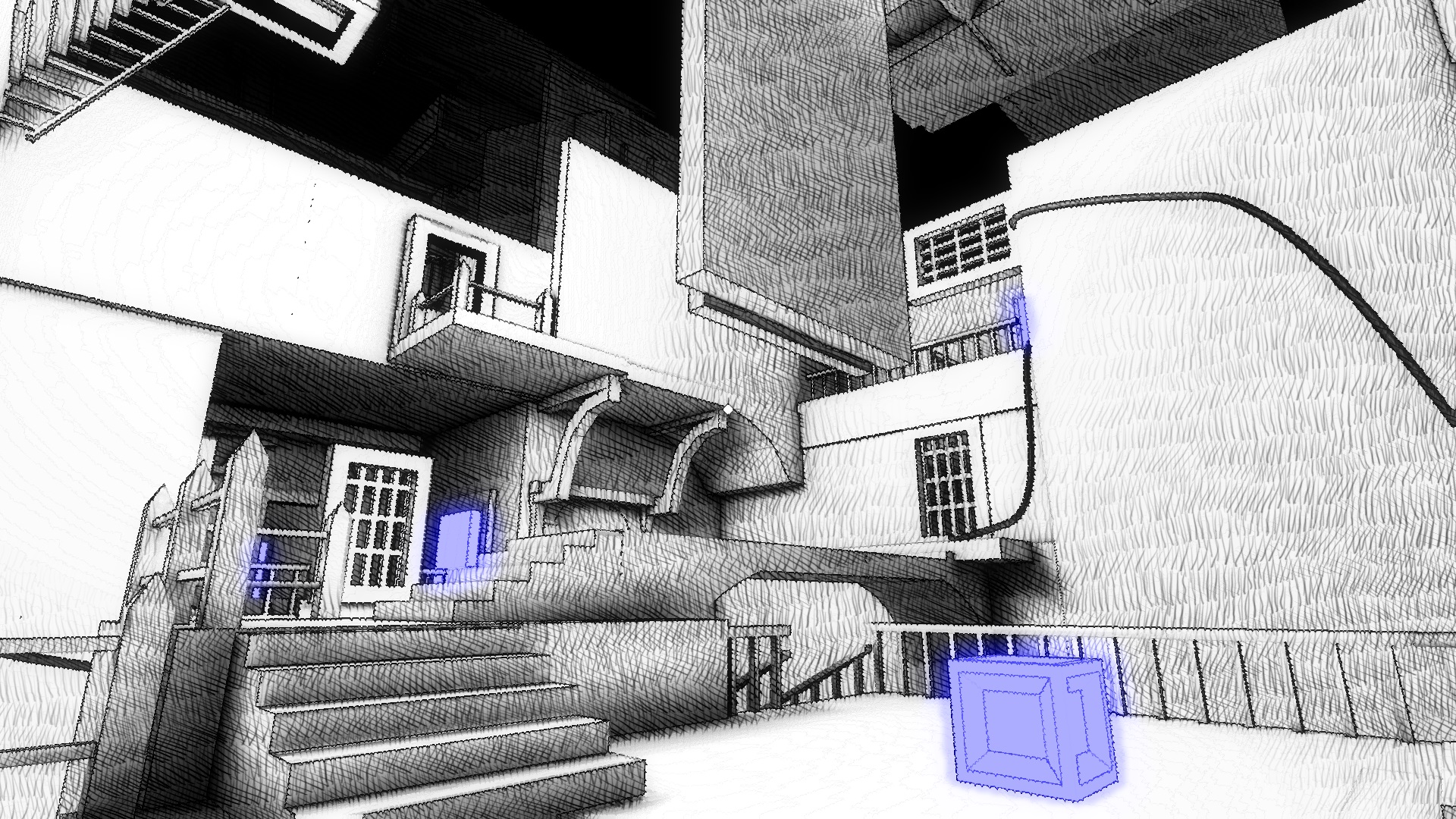 Fear not, as the puzzles are easily distinguishable, and each different room named to help you to keep track. There are checkpoints at multiple points in the puzzles, so if you make a mistake, get stuck, or just think you need a fresh slate to look at things, you can begin again at that point rather than from the very beginning of it. Be advised though, if you opt to walk out of the level and go back to the Transfer, whether to admire the view or seek out a different puzzle, your current progress will be abandoned.

The game is played in first-person, though we don't have too much backstory on who or what the main character may be, or how they were even placed there. You do get a peak at it (or shall we say, at yourself) at a couple of points, but I won't spoil the surprise for you. I would have enjoyed a bit more story or background on it, though. And in the very end, when you have completed all four puzzles and unlocked yet one more area, there might be someone special for you to meet.

If all of that isn't enough to send your geometric senses tingling, there's also a secret lurking somewhere within the maze. You're going to have to be devilishly clever - or perhaps look at things with just the right perspective - to find it.

To play Fragments of Euclid, you can use the arrow keys to navigate through the world and interact with things, as well as [Space] to jump. If you are prone to motion sickness, there are settings available to change the field of view in the options menu of the game. So are you intrigued yet? Come get sucked right in...or is it out? When gravity and space can be distorted in something that appears a contradiction at first glance, it's never quite clear - nor boring.

I like the M.C. Escher look to this! I, however, have a sense of direction not unlike that of a houseplant...Once the rooms start turning I get very turned around. Will have to draw a map with a 3D printer LOL!

INNNN-CREDIBLE!!! Just a totally fantastic game...and it's a lot of bang for your buck. (FREE???!?!?!)
The graphics are superb, the vast puzzle solving dynamic thrown at you endlessly....I could play this for hours.
(I am amazed I stopped to write a comment, but I had to gush.)
If you love "Portal" and Submachine like stuff...get this one!

This game is absolutely must try to all M.C. Escher fans! Not very long though. I manage to make it run on Ubuntu Linux with no problem. It is most welcome to see games made for Linux as well.

A tip to all who play this. Do notice the signs of areas to avoid revisiting them again. Although, part of the challenge is to find out one's way through this maze.

Nusan hopefully gets enough support (money) and time to develop the game further, and if he does, I am most certainly interested to even pay for it.