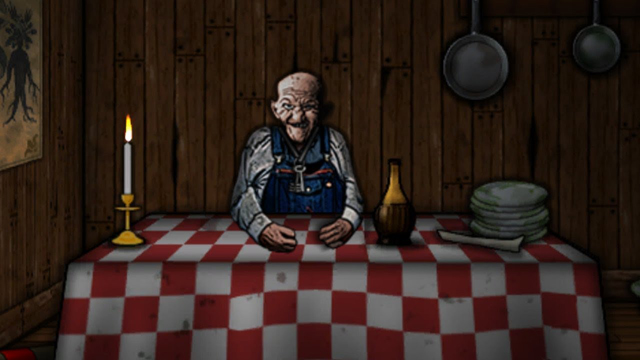 When does "taking liberties" go too far? Like the lost episode of a Brothers Grimm story, Little Cabin in the Woods - A Forgotten Hill Tale is a twisted take on the mundane. This latest work from FM Studios is quick and to the point -- an abbreviated, self-contained side story installment of Forgotten Hill.

You're back in a house that looks quite familiar, with photos, puzzles, and furnishings reminiscent of previous episodes. The ask is simple and the clues are direct; however, some puzzles may take a bit of fidgeting -- user error or designer error, hard to tell. Compared to other browser game horror series like Rusty Lake and The Last Door, Forgotten Hill is generally less refined. FM Studios's games are less smooth to play; its animations nonsensical; and its graphics less uniform, resembling a collage of various stock sources. Attention to detail is limited from both the user interface and graphic design standpoints. On the flip side, what the series and Little Cabin lacks in finesse, they make up for in originality. In addition to interwoven storylines and intriguing characters, this game indeed satisfies players' cravings for excursions into the point-and-click horror realm.

While spooky and unsettling with a couple of jump scares, once finished, this installment is best described as "comical." The premise, animations, and conclusion are simply ridiculous. Once you've played, you'll know what I mean. Little Cabin in the Woods is a bite of fun, campy horror, a hokey caricature within the scary game genre.

Stuck on code for symbols in the room off the kitchen.
Anyone else there? Any tips?

@River Cat, there's an item you need that gives you a clue about a particular puzzle that will help you solve the room off the kitchen:

solve the four-shape door puzzle in the fireplace room

use your poster on the spiked wall of the next room

solve the slider puzzle to open the safe

combine the red/green/yellow clue from the safe with the moving arm puzzle with all the symbols (behind the left door on the screen with two doors), to get four symbols for the room off the kitchen

Thanks vadasz. I think I'm missing something crucial, because I can't solve the 4-symbol puzzle either.

I'm thinking it is something to do with the map in the bedroom since this is the only clue I have at the moment. I also have a bucket and a bowl, but can't use them, and the poster.

You do not say if you have solved any of the puzzles yet. There is another puzzle-clue you see in the beginning before you solve any puzzles.

The raven/skull picture on the wall, next to the door to the kitchen

Thanks Brf for getting back.

A push in the right direction would be appreciated. I don't like leaving games half finished.

You mention the frame on the wall with the circles in two colors. What else have you seen in those two colors?

Thanks Btr. Just the push I needed. I can't believe I missed it.

what is the answer to the four symboled door in the fireplace room????