"Forgetting isn't enough. You can paddle away from the memories and think they are gone. But they will keep floating back, again and again and again. They circle you, like sharks. Until, unless, something, someone? Can do more than just cover the wound." What is worse than forgetting? In Forever Lost: Episode 3, the final point and click mobile adventure game (available for Android and iOS in HD or SD flavour) in the Forever Lost Trilogy, you learn that although losing your mind, memories, and everything that makes you you is pretty frightening, there are actually worse things than forgetting. 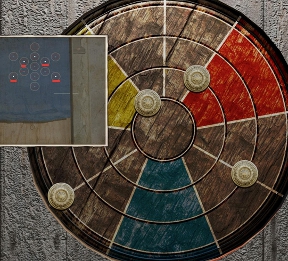 Glitch Games comes roaring back after their little amuse bouche in the form of Cabin Escape to give us an answer as to what precisely is going on with Jason, Alice, Hugo, and our unknown protagonist with a solid walkabout adventure that lasts as long as all of the previous games combined, Whereas Episode 1 took place in the underground lair, Episode 2 in and around Hawthorne Manor and Cabin Escape in, well, a cabin, Episode 3 sprawls across multiple locations in what is now evidently an island. Going from the house where Episode 2 left off you will travel to Alice's cabin (again), the Elysium Forest, and the grounds of the Hawthorne Institute itself, each solved puzzle a new discovery which brings the story finally into a cohesive whole. Is the protagonist Jason, Hugo, Alice, or some other poor sap who has dropped into this nightmare and can't get out? All will be revealed... or will it?

Playing Forever Lost: Episode 3 is a matter of tapping and dragging your way through the gorgeous scenery and solving puzzles in every corner of this fascinating world. As with all classic point and click adventures you have a satchel to hold all of the items you pick up along the way, and Glitch Games' brilliant in-game camera to record everything you see. The camera feature allows the player to snap a pic of whatever they see, placing the images into an album where you can retrieve the pictures, examine them in close-up detail, and even scribble notes on them. Episode 3 auto saves when you close the app and there are eight slots in which to save, allowing for multiple players or games on a single device. The scenery astounds whether it is in the detailed and lush interiors or the moody forest, accompanied brilliantly by the haunting music of Richard J. Moir. Best of all is the built-in hint feature which can help players around any obstacle. By turns spooky and funny, moody and dark, Forever Lost: Episode three hits that sweet spot known to every fan of classic adventure gaming, a perfect balance of exploration and puzzle solving whilst telling a grand story, this is an adventure that is destined to become a classic in the field. Glitch Games has once again given us pitch perfect adventuring combined with a gripping story and sprinkled with their sly hidden pop culture references and occasionally painful puns. Time to enjoy swimming with the sharks!

I hate paying for games, not because I don't think they are worth it or the amazing creative developers don't deserve it, but because it is such a crap-shoot. THIS series is worth twice the price. In fact I wish Glitch had charged twice the price so they could hire more people and release games more often.
Everything about this game is en pointe. Beautiful graphics, well developed plot, just-challenging-enough puzzles that are logical, intuitive navigation. The sound track is good, but I would like to see it better connected to the game, rather than randomly playing. Not serious enough to detract from the experience though.
I would love to see JIG review more iOS platform games worthy of purchase to fill the dry spells.
Thanks for this one!

I've been traveling and haven't had a chance to check in on JIG, but it's great to see this game here, and only slightly disappointing to see so few comments. Anyone who's played the first two episodes (or even just Cabin Escape) can probably attest to the quality that's on display here. Best of all, FL3 is the longest installment yet. I was fortunate enough to be one of the beta testers, and while the first beta was already darn near release quality, the final release (several hundred tweaks later) simply knocks it out of the park. I couldn't have asked for a better finale to what was already one of the most impressive point-and-click adventure series ever made.

I just got an email from Glitch announcing that all of the "Forever Lost" games (along with their companion "Cabin Escape" and the more lighthearted "Ferris Mueller") are now available for Mac and Windows as well. Two more ways to enjoy this remarkable series.