Ominous music pounds in your ears as vague blurs slowly define into concrete walls. Footsteps and distant dripping water echo as confusion engulfs consciousness. Where am I? What is this place? Who Am I? With that chilling and atmospheric opening begins a stunning new adventure from Glitch Games, Forever Lost: Episode 1, the twisted grandchild of many a point-and-click escape game. 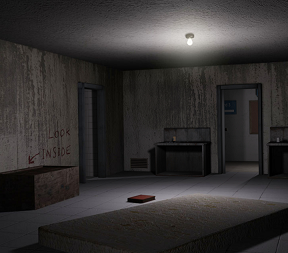 Answers will not come quickly as you explore a haunting medical facility in search of the truth. Instinctively, you what to do: explore, find, process, and solve. The story takes place as the unknown protagonist explores the quiet building, and the story is built with clues found in medical files, notes, books, e-mails, and most disturbingly of all the graffiti which covers many of the institutional walls. Who are you? Why are you here? And most importantly... how do you get out?

Gameplay is pretty standard for a point and click game translated to the touch screen of a mobile device. A simple finger tap will create movement, with a helpful "back" arrow to retrace your steps. Items can be examined, picked up, and even taken with a simple gesture, basically point and click without the "click". A bottom scrolling inventory that can be conveniently rolled up into a briefcase is all that is needed for the numerous items that can be found in this wide-ranging game, and a rather unique feature takes the place of the classic adventure hybrid notebook in the form of an in-game camera and photo album. Simply touching the camera feature snaps a photo of the scene, said photos stored in retrievable form in an album icon which allows the player to scroll through all photos taken, zoom in, zoom out, and even scribble notes. A handy way to keep track of the plethora of clues that are to be found, and one that is also necessary for the solving of at least one puzzle. 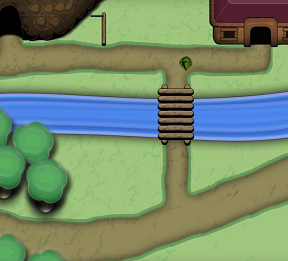 Forever Lost: Episode 1 is not an adventure hybrid; there are no hidden object scenes to be found within. Instead, what Glitch Games has given us is pure, classic adventure that harks back to the golden days of Myst, with a lot of pedigree from more recent adventures such as the episodic Being One series, albeit without the jumpscares, boss fights, and copious amounts of blood. Along with the classic found objects having a use somewhere there are several mini-games, including a classic pipe puzzle and a stunning and enchanting little top-down RPG that more than vaguely resembles classic Zelda. The game saves automatically when the player leaves, allowing the gamer to pick up precisely where they left off in this cavernous, eerie place that is really not fit for human habitation, even if they are psychotic, which is what many of the medical records found along the way imply.

Analysis: For those old enough to remember the classic adventure days Forever Lost: Episode 1 is sure to ring the nostalgia bell, and those who are younger are about to get an epic treat as they discover classic adventure done really well. Spooky without being frightening, atmospheric without resorting to cheap tricks like jump scares or gore, Forever Lost: Episode 1 serves up chills and excitement in a way that is rarely seen or done so well. 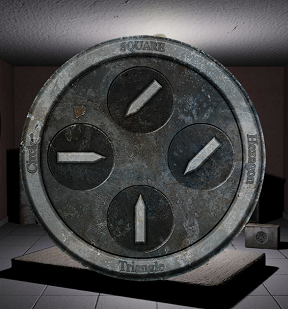 Considering that the setting is a supposed psychiatric hospital, albeit one that would probably be shut down by state or federal regulatory agencies if they ever saw inside, the visuals are quite stunning and constitute a visual treat of early industrial ugly. The sharp incidental sounds and vaguely unsettling music underscore the mounting fear and paranoia of the story, merging seamlessly with the visuals to create a chilling atmosphere. Movement in the game is smooth and easy and the gameplay itself takes advantage of the touch screen allowing the player to create actions with taps, swipes, and other finger movements.

The puzzles and mini-games tend to keep within the dark theme and cover a range of styles and difficulties. The lone exception being that adorable little faux Zelda RPG which interjects a sudden burst of color and light into the gloomy proceedings, like a bit of childhood lost surfacing amidst the grind of grimy everyday adult life. A built in hint feature in the main menu page is helpful for when a players is stuck without giving the answers outright.

The navigation can feel a bit strange at first with that strange backing arrow, but otherwise there are very few things to complain about in Forever Lost: Episode 1, other than the fact that it perhaps ends too soon and leaves us panting for Episode 2. Challenging adventure wrapped up in an atmospheric and portable package is what we have been looking for, and what Glitch Games has delivered in spades. Turn out the lights, crank up the sound on your portable device, and be prepared to be sucked into the world of Forever Lost.

You begin in a dingy room, not knowing where you are. There is a mattress on the floor, and a red book. There is a door in front and a door to the left.

There's lots to explore in the nursery.

The Theater and Solitary

You should still be at the end of the corridor, with the reception area on the left and the theater and solitary on the right.

These are the gray rooms indicated on the map found earlier. Time to explore.

The Door with Two Keys

Remember that wooden puzzle in the nursery? It required four shaped pieces, and we now have four puzzle pieces in the inventory.

You begin in a dingy room, not knowing where you are. There is a mattress on the floor, and a red book. There is a door in front and a door to the left.

There's lots to explore in the nursery.

The Theater and Solitary

You should still be at the end of the corridor, with the reception area on the left and the theater and solitary on the right.

These are the gray rooms indicated on the map found earlier. Time to explore.

The Door with Two Keys

Remember that wooden puzzle in the nursery? It required four shaped pieces, and we now have four puzzle pieces in the inventory.

Thanks for another excellent walkthrough Grinny. I don't know how you figure these out. Amazing game.

My mind is a very strange place...

Calling Chapter Three a chapter, is a little misleading.