Heart pounding, your raspy breath echoes in your ears amidst the sound of alarms and the inevitable ticking of a countdown clock. Swiftly you run to the nearest escape pod as time quickly slips away. Heels clatter amongst the throbbing of your heart and the wailing of the alarm as you dive into a handy escape pod and fly away from the mother-ship seconds before detonation. What is going on? The scene shifts to 24 hours earlier...That thrilling opening sequence belongs to the latest adventure hybrid from Alawar Games, Forbidden Secrets: Alien Town, and it's just the beginning of a rollicking good ride through a pastiche of nearly every sci-fi and horror cliche of the past 50 years. 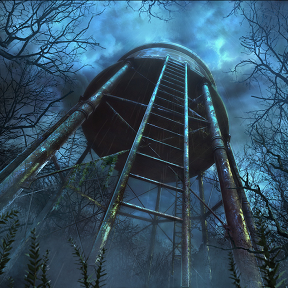 The year is 1969 and it is a gloomy, rainy day in Chicago (are there any other kind?) as a young agent from the Federal Bureau of Biosafety sets off on a train ride to the middle of nowhere, a.k.a. the town of Fort Nightingale. There is some sort of an outbreak in the dying, decaying town that has afflicted the remaining residents, causing them to fall into a stupor. That's not the only problem as you play the lady agent attempting to get to a town that seems to have no ties to the outside world, a place that no-one really goes, especially after the army base and the research laboratory left years ago. Can you find what is causing the illness while dodging the few unaffected (and slightly unhinged) residents as well as the creepy, creepy children?

You wander inside and around the town with the help of a changing cursor to point out areas that can be traveled to along with an amazingly useful map feature that shows where you are, where you've been, what areas need to be traveled to, and any of the "beyond objects" (morphing objects found as a side quest) you may have missed in your travels. Hotspots to investigate are highlighted by small glints of light; hidden object scenes by a cascading, otherwordly glow; and other areas of interest by the helpful cursor. A bottom loading inventory that tucks away out of sight when not in use holds the plethora of items found along the way which might be useful later, and of course the obligatory notebook keeps track of the story as well as visual clues that might be useful later. 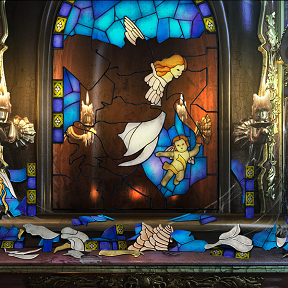 Forbidden Secrets: Alien Town plays like a standard point-and-click adventure sprinkled with puzzles, mini-games, and a variety of hidden object scenes to be solved or played through. You can walk around in the usual fashion or use the aforementioned map to jump from scene to scene. Gather clues, solve puzzles, chat with the increasingly paranoid citizens and the exceedingly disturbing children, and see of you can solve the mysterious plague that has decimated the town and maybe, just maybe, some of your own personal history.

Analysis: Gameplay in Forbidden Secrets: Alien Town is an amazingly cheesy and delightful mix of sci-fi and horror sprinkled with an astonishing amount of good strong puzzles and entertaining hidden object scenes. While the story and its resolution are a bit scattered, the wild atmospheric ride is most definitely worth it, especially for those looking for not only pretty graphics and good story-telling but also an amazing mix of gameplay. 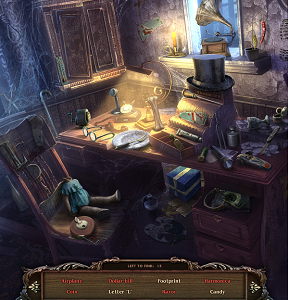 Visuals are the standard "gloomy town threatened by a mysterious entity" done with a sharp eye for detail and some life-like animations that bring the little town to life (as much as possible when most of the citizens are frozen into place). The story borrows heavily from the classic sci-fi/horror film "Village of the Damned" (that would be the 1960 black & white British original, thank you, not the terrible 1995 re-make starring the late, great Christopher Reeve) down to the glowing-eyed, robotic, white-haired, British-accented children. Other stories are thrown into the mix with a little "Stargate" here, a little "Children of the Corn" there, with a heavy sprinkling of classic 50's sci-fi graphics to set the mood. In the end the story may not make a lot of sense, and the agent's past is thrown in there willy nilly without any warning, but despite the flaws ends up being a trashy good time. You can almost hear Joel and the bots snarking at every bit of dialogue.

Perhaps the best aspect of Forbidden Secrets: Alien Town is the gameplay, which is a dense, layered mix of pure adventuring, puzzle solving, mini-games, and hidden objects scenes in the perfect ratio. Most of the puzzle solutions are logical, although they do involve a rather heavy amount of property damage to the town you are trying to save. The mini-games are a wide mix of the familiar and the original, and even include some reflex puzzles like an alien-themed whack-a-mole and a nice call-back to early 80's avoidance video games. The hidden object scenes are nicely interactive and vary between classic "find the list of objects" and "reverse" scenes where you must place items back into the scenery. Most hidden object scenes are visited twice, once to find things, and once to put things back (or vice-versa).

The voice acting is adequate, although it falls down in places, and some of the dialogue reveals that English is not necessarily the first language of the author. The history is all out of whack, with a character from 1969 discussing Ebola (first noted outbreak: 1976) and someone in 1959 discussing the Cuban Missile Crisis (which if I recall happened in 1962). And the bonus adventure that comes with the Collector's Edition is pretty hefty, but features Native Americans in a very cartoony, frankly insulting way. It all seems to fit, though, with the goofy story-line and spooky atmosphere, creating an amusing and entertaining experience. Do adventure hybrids have the equivalent of a B-movie double feature? If so, Forbidden Secrets: Alien Town is first on the bill.