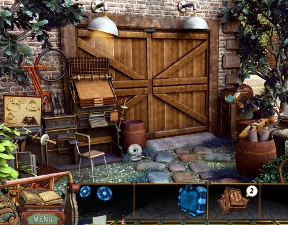 Even though the series has a rich back story, you don't necessarily need to be privy to it in order to play. The opening cinema gives you a brief overview, and for the purposes of enjoying the plot and gameplay, it works out just fine. The protagonist Jesse and her family are in charge of protecting the flow of time. She discovers their less-than-perfect history, though, and tries to escape back to her "normal" life. Instead, she ends up even further in the past and has to fix a time ripple before she can get back. Things get even more complicated from there, introducing the G.E.M. machine, new members of Jesse's family, and more, creating a somewhat confusing but still interesting story to follow. But hey, who said life would be easy when time itself is destabilizing?

Gameplay is structured around hidden object scenes and casual adventure-style exploration. Poking your cursor through each scene, you'll pick up loads of objects that fill in shadowy slots in your inventory. Occasionally you'll find a key item and it stores itself a little differently, allowing you to click and use it on areas later in the game. You're given a few scenes to wander around in, but a few puzzles always prevent you from traveling too far, keeping the game in time with its strict storytelling layout. 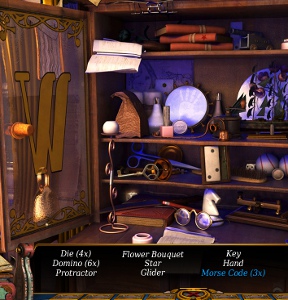 Analysis: Rounding out a well-liked trilogy has to put a lot of pressure on the developers. On the one hand, fans want more of the same formula, but on the other, if you don't innovate, you run the risk of drowning. Flux Family Secrets 3 plays things close to the norm, not really walking far from what you would expect, but still delivering on high points like visuals, puzzle complexity, and sheer volume of hidden object scenes.

Speaking of those item laundry lists, Flux Family Secrets piles on the object finding scenes in thick hillocks, crafting both a main game and most of its sub-scenes out of a similar mold. For a game so steeped in a hidden object motif, you would expect them to be finely polished pieces of point and click glory, yes? Unfortunately, that's not always the case, and you'll find a number of occasions where Flux Family Secrets falls victim to the usual list of hidden object flaws: unfairly obscured items, dubious objects that only vaguely resemble their listed name, and obtuse puzzles. That's not to say the game misses the mark, it just stumbles over the same problems as most games out there, and because the rest of it is of such good quality, the imperfections stand out more than usual.

Flux Family Secrets: The Book of Oracles takes a fine storyline void of traditional spooky themes and crafts a spunky hidden object adventure around it. It's loaded with charm and stocked to the brim with items to find, games to complete, and puzzles to solve. It may not quite live up to the oomph presented by its predecessors, but it's still a heavy-hitting hidden object game you won't want to miss.

Chapter 1: Back to the Future

Back of the Mansion

Inside Pavilion and Gate

Study and Outside Monticello

Mansion Garden and Inside Pavilion

Inside Pavilion and Gate Portal

I won't spoil anything, but I will say that the ending is a little messed up, when you think about it. I also thought the sister had a sudden Heel Face Turn, but other than that I really liked the game, especially finding all the factoids. :D

Yeah, I did not get the ending. Wasn't she told by either her mom or the "Oracle"

All-in all, better than the second one, not as good as the first.

Chapter 1: Back to the Future

Back of the Mansion

Inside Pavilion and Gate

Study and Outside Monticello

Mansion Garden and Inside Pavilion

Inside Pavilion and Gate Portal

Chapter 6: The Well of Knowledge

Newton's Office and Outside University

Office, Portal and Hall of Books

Chapter 8: The Beginning of the End

Another View of Cellar 1

Screenshot
You have finished the final chapter of the Flux Family Trilogy, but, might there still possibly be more to come? Guess we will just have to wait to see.