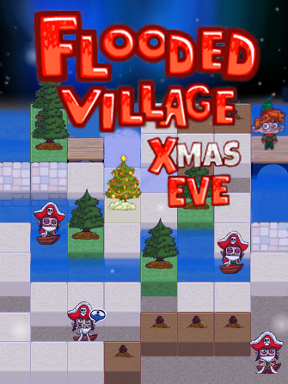 Yo ho ho and a bottle of eggnog, even pirates are getting into the holiday spirit in Flooded Village: Xmas Eve, an elf-saving, Christmas cheer bringing, and snow-dappled expansion pack to Staal Media's original puzzle game about rescuing landlocked pirates. Do so by removing blocks, sending water to grounded ships without drowning out the elf villagers.

This time around you have eighteen new levels and an added twist: gain extra points by using ice blocks to turn evergreens into Christmas trees; meanwhile, avoid turning people into frozen chunks. A few tutorial style levels will introduce the concepts to you as each additional element is added, yet the puzzles become more thinky quickly enough to hold your interest. The scoring system seems a bit fickle, requiring speed of light action and the most frugal use of clicks in order to get that ego warming "Great" on each level. But with such a smooth user interface, cute graphics and festively mellow tunes, gameplay is relaxing and enjoyable, a surefire way to wash away stress and be as jolly as a pirate on Xmas Eve!

For some reason, the game timer and end-of-level timer don't seem to agree that often. The worst thus far is X-5, which gave me 0:07 when the timer ended on 0:04.