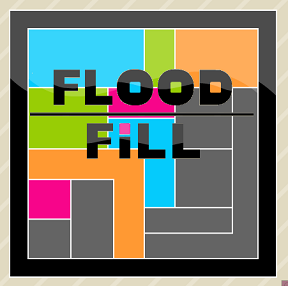 The Four Color Theorem states that for any separation of a plane into contiguous regions, producing a figure called a map, a maximum of four colors are required to color the regions of the map so that no two adjacent regions have the same color. This fact might seem of non-trivial interest only to geometricians and cartographers, but, fortunately for us, developer OneFifth noticed another interesting property: it makes for quite a nice basis for a simple idea puzzler! That game is Flood Fill, and there's no doubt it deserves a place on your browser gaming map.

In each level, click the mouse to fill in areas of the map with one of four colors: blue, green, orange, and pink. Switch between colors by clicking them, or using [1234] or [ASDF] as keyboard shortcuts. Each level is finished when all areas are filled in, with no two adjacent (which is to say, meeting at a side, rather than a corner) regions sharing the same color. All levels are proven a 1976 brute force proof to be doable in four colors, but a gold star can be earned by using fewer. Flood Fill isn't particularly complex, but it's surprisingly engaging. It's a premise that could probably be sustained for longer than the 20 included levels. We could probably quibble about the aesthetic value of neon, but hey, the background music is catchy. So few games offer you the chance to make like Piet Mondrian in the comfort of your desktop, and Flood Fill will fill a coffee break quite nicely.

Cute game. Gold-starred every level, although those stars look more bronze than gold.

Talk about a blast from the past.. I played this game on Kong when it came out in 2009.

It doesn't lose its appeal of trying to get gold star on every level. It's a good little game. Not too frustrating.

And as someone who dropped my major in mathematics when the going got rough, all I can do with regard to the Four Color Theorem is to quote Lurch from the Addams Family: *low groan*

1. Thank you for spotting! Fixed!

2. I'm going to have to argue this one: I say that a maximum of four colors is required, since there are clearly situations in which only three, two, or (for a very boring map) one color is required. However, there is no such map that requires five colors. Therefore, four colors is the maximum number of colors required.

The Four Color Theorem explicitly deals with such maps that are trivially solvable with more than four colors, but challenges the individual to ... Okay, Tricky. You're right. It's maximum.

(Can I plead illness here? Addlepated and easily confused? 'Cause I am home from work with a fever.)

Nice little game, it just went by so quick. Even going back to redo the levels I didn't get the gold star the first time didn't take very long.

That was fun and relaxing. Just the right difficulty for me.

I loved this game. I actually managed to understand it and win all the levels, plus it's relaxing. 5/5.

Awesome game, it just soooooo needs to be longer. :)

I was in the mood for a good relaxing puzzle game.

This filled that void.

It is a little annoying that it just flips off to the next level when you have completed regardless of whether you want to fiddle to get the gold star or not.

I know you can go back but it is just a little irritating.

Fun other than that though

I love this game. I just got all the gold stars, and I want more levels. Does anyone have any "if you like this game, you will also like..." recommendations?

While not exact in gameplay, these games have a same-y feel as far as play style goes:

It's always a fun adventure to go spelunking through the JIG archives, also; you never know, you might discover your new favorite game there!

Edit: Almost forgot to point out, try following the tags at the top of the article, too. For example: the color tag! ;-)

Excellent relaxing game that needs more levels! However, I'm with yaddab regarding auto-flipping to the next level...

Hooray for math-related puzzles. A friend of mine had a game like this (or this game precisely) on his iPhone once. I played it all the time. That and Trainyard.

Anyway, the four color theorem is awesome, and also true, which means if I absolutely couldn't figure out how to do a map with just 3 colors, I could add a fourth and it would just work (as long as I did it carefully).

Personal method of getting the harder puzzles:

At every "T" or "Y" intersection there must necessarily be three different colors. Start filling stuff in with a single region that is adjacent to such an intersection, then chain together these intersections with the logical premise, "if there's these two colors already there, use the other one for the other side of the T/Y".

When you run out of Ts and Ys to chain, randomly pick which colors to put around an "X" intersection (or any intersection with more than three incident regions) and then go back to using logic to determine what to fill in. You should get it eventually.

My only disappointment was the lack of a "clear" button to clear all the colorings from the map (without going back to the previous puzzle and going forward again).