If you've ever played Telephone before, then you probably know you can't rely on other people to carry along simple messages without turning them into hilarious garbled innuendo. However, most of us generally trust our Christmas wishes to make it through intact... but most of us don't rely on paper airplanes to ferry them to the North Pole. In the iOS version of the original browser launch arcade game Flight, a little girl's wish to bring her mother home for Christmas takes a global detour and gets more than slightly misinterpreted along the way. Through simple, addictive, touch-screen gameplay, you'll journey around the world touching the lives of a variety of unusual characters in even more unusual ways. Lifted from your browser and onto your iOS to go wherever you do, Flight is a gorgeous, clean little game that takes a simple concept and soars with it. 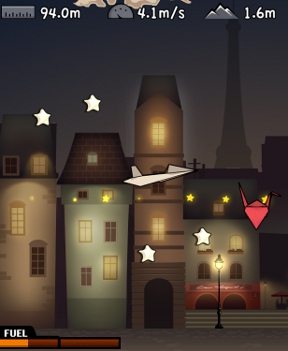 Each stage is set in a different country, and each day you'll get a chance to hurl your paper airplane a little closer to its destination, picking up the currency you need for upgrades along the way. Tap and hold on your paper airplane to pick it up at the beginning of each level, and swipe and release to throw it. Initially, all you'll likely be able to manager is a sad little arc that peters out after a short distance. Luckily for you, the stars you nab turn into cash (it's magic, we ain't gotta explain nuthin') you can spend between launches on various things that increase your performance or even give your paper airplane some suspicious un-paper-airplane-like capabilities. Purchasing an engine, for instance, will allow you to tap the screen and deliver a fiery burst of fuel to send you higher, or you can splurge for handling abilities that will let you tilt your device to direct your plane as long as the fuel holds out.

While you can purchase the money for upgrades via in-app purchases, Flight never feels like it's steering you towards that option the way a lot of other mobile games do. You'll have to do a little grinding to earn cash, of course, but with a little thought towards the upgrades you buy and a deft touch during the launch sequences, you can easily earn everything you need to complete the game without spending a game. Which you'll want to do, even if you completed the original browser version, because Flight is as gorgeous and addictive as ever. It's remarkable how compulsively playable the simple concept is, and the polish and dreamy, lush presentation makes it the sort of thing anyone can enjoy. If you've played the original, you'll probably find the iOS incarnation mostly identical apart from the touch-screen play, a few upgrades, and a somewhat different style. Flight is an absolute perfect fit for iOS, and the imaginative design and simple gameplay will ensure it gets its hooks into absolutely everyone. If you're looking for a fun, casual, and whimsical little title, look no further and book your ticket to take Flight today.

is so funny. It also helps knock out a few achievements.

7,343 Views
6 Comments
chrpa— Jayisgames needs your help to continue providing quality content. Click for details Hi, the week is over and the newest Weekday Escape here! This week we have two Amajeto's games and both are very nice and satisfying. Good and...  ...

4,627 Views
0 Comments
jayisgames.com— Some video games are incredible, but they don't get the rating or attention they deserve. Here's a list of the top underrated video games worth your attention.  ...

4,733 Views
0 Comments
chrpa— Jayisgames needs your help to continue providing quality content. Click for details Welcome to Mobile Monday! In the first game by Kansho (Saburou Konuma), still holidayish, you find yourself in high mountains locked inside Santa's cabin, When you escape...  ...