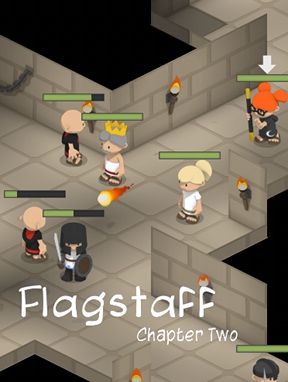 Don your armor, prep your spells, and grab your favorite fluffy towel; Flagstaff: Chapter Two is here! The next installment of Joel Esler's cute and silly RPG offers the same relaxed dungeon crawling as the first chapter, plus new enemies, new powers, and a new hero to play.

If you played Flagstaff: Chapter One, then the mouse-based controls of Chapter Two will be familiar. On your turn, click a character to control him or her. Click on the tile you want the selected hero to move, or pick a power and click on the character(s) you wish to target. You can only move your hero so many spaces a turn, and powers can usually only be used within a certain range, but Flagstaff intuitively shows you where these limits are. You can also move all your heroes at once, and you can speed up character movement by clicking again as they move. Once you have done everything you wish to do, click the "End Turn" button and see how your enemies react. As you defeat foes, you can level up by selecting a new power for one of your heroes, or by upgrading an existing power. Explore, kill enemies, level up, and figure out what is behind the dungeon's infestation.

Environments in this chapter of Flagstaff are the same randomly generated stone-walled dungeons as Chapter One, but there are some new faces this time. In addition to the classic Knight-Ranger-Wizard-Priestess quartet, you now can also play as the King, who offers an interesting mix of pugilism, leadership, and towel-based powers (really!). Several wizardly "sauciers" offer a bit more challenge than the fragile skeletons and guards of Chapter One, and a boss fight lends some variety to the standard hacking and slashing. Still, if you select your powers well, the game shouldn't put up too much of a fight. Flagstaff remains more about the silly story and casual pace than about seriously challenging veteran RPG players, but the design is cute and distinctive, the heroes all have interesting and balanced powers, and the pace is perfect for a light bit of dungeon crawling. Chapter Two builds on the promise of Chapter One, and tantalizes for the next installment of the Flagstaff series.

It looks like your best bet, early on, is to get the +1 action add-on for most of your group, and emphasize the cleric's healing powers (especially now that she has a resurrection power). Every turn you can heal away the damage done to your party is one turn the enemy just wasted.

Love the cut-scene dialogue, by the way.

If you want it to be slightly challenging, try it without buying the 2x action for any of them. Otherwise, it becomes way too easy to win even splitting the team into two or three. The wizard especially is powerful enough to win the game by herself (with knight and king giving some bonus actions). That said, it has improved from the last chapter, and it's cute and silly dialogue and artwork allow it to be enjoyable for all ages.

I agree with opinions I've seen here and there that the game is quite fun but too easy and a little short. Well worth a look though, especially if you like puns. :)

I really hate that I can't toggle "move all" off like I could in the first chapter. This is making me VERY frustrated.

Otherwise I'm enjoying it a lot. It's cute and fun and a good diversion :)

I feel like this episode was a lot shorter than the first (only 6 floors?)... but I'm definitely looking forward to the release of the subsequent episodes! :D

I found the knight a very usefull character in the first game as 2x 8 damage would destroy anything in the game. Now, however, he is only really usefull as a tank (with the shield ability). The kings attack starts at only 5 damage, but it is a very strong investment to upgrade it, as it becomes 10 and then a whopping 15 damage(paired with 2x moves, he can kill anything except the boss in one turn). The Mage has more support abilities like confuse but I still find the least useful character. In the first game,smite was a worthy investment, but in this chapter, there may be enough healing to keep the priestess ocupied the whole time, and smite would be pretty much useless unless you upgraded to level 2 or 3. The ranger is also not as usefull as in the first game. Point blank sucks, as it does 8 damage, when the normal shot can be upgraded to do 10, so there really isnt a point to it. I felt they should have kept skeletons, and make huge groups of them, like 10 or so. That may just be me.

Wow, it delivers: the changes since chapter 1 are very subtle, but close to greatness. I did stop using the move-all altogether, which could do with a quick peek at Baldur's Gate (sorry, I've been out of the loop for a bit), the wizard indeed needs improvement though, and I wouldn't be averse to a bit more of a challenge either. Besides this, the characters are generally balanced better, I like the sense of humour, and the graphics work really well to combine this with the true dungeon-crawling experience.