So you want to be a ninja? You've gotten the cool clothes, the headbands, the shuriken, the blow-darts, the green escape men...you didn't know that green escape men were a vital part of the ninja accouterments? Well they are if you want to graduate, or at least escape from the ninja house in No1Game's latest escape men finding thriller, Find the Escape Men 50: In the Ninja House (Volume 2) This Time It's Personal! 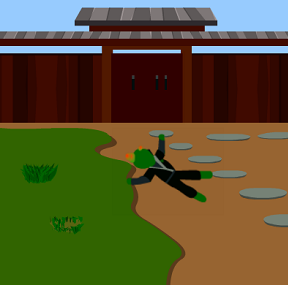 Yes, a sequel to Find the Escape Men in the Ninja House has been spawned, since you didn't really make it all the way out the first time around. You must not only find the difficult to spot escape men (practicing their mad ninja stealth skillz in the surrounding scenery), you must actually fight them, and they aren't pushovers. Or, at least, the 3rd graders aren't pushovers. The 2nd grader certainly is, although it's nice of him to offer to help you along once you kick his scrawny...butt. Navigation is by the usual bars at the sides, top, and bottoms of the screen, so that you can explore the house (actually a Ninja School) and fight your way to ninja-hood, or something like that. Along the way you will find the usual ten escape men, but in some rather unusual ways. Basically you're looking at the usual combination of puzzle solving and use of found objects.

Find the Escape Men 50: In the Ninja House (Volume 2) is quite the departure from the usual find the escape men games. Shame, though, that there's no changing cursor in this larger than usual playing field, which leads to some pixel hunting. The space is larger, there's a lot more use of found objects, and the escape men ninjas can be quite the potty mouths as they attempt to trash-talk their way to beating you to the ninja punch, as it were. For those who don't just want to spot the little green escape men in the scenery but who want to beat the living daylights out of them as well, well, here's the escape for you. Just don't be freaked when you find God in the pond.

Play Find the Escape Men 50: In the Ninja House Volume 2

Find the Escape Men 50: In the Ninja House (Volume 2) Walkthrough

Wax On, Wax Off Daniel-san

Killing Two Birds With One Stone

God is in the Tub

The Truth Shall Set You Free

Something There is That Doesn't Love a Wall

using the sickle to cut some grass

none of the objects seem to work.

cut the grass, you need to figure out what to do with it. Once you've solved the grass puzzle you can then move around and do other things.

A manipulator, a hammer, a blowgun, shuriken (�ninja's throwing knife�), and the admission makimono available to use.

The medicine, rope, washcloth, sickle, and needle grayed out.

I've got no idea where to go from here. I can't seem to do anything useful with the gate, the locked door behind the building, that tree that rustles when I click it, or the grass cut into escape-man shape.

Were you able to

read the clue inside the shed, the one on the end of the table? If you haven't, click on the area between the table and the bucket.

Thanks, grinnyp. Figured it out just before I saw your hint.

Thanks, I hadn't seen that. I've complete the game now. I was just about to give up and ask for help again, but then �

I found that mouse. I could have sworn I tried to look in the bottom of the closet before.

Find the Escape Men 50: In the Ninja House (Volume 2) Walkthrough

Wax On, Wax Off Daniel-san

Killing Two Birds With One Stone

God is in the Tub

The Truth Shall Set You Free

Something There is That Doesn't Love a Wall

This escape game seemed very, very non-intuitive to me. But still enjoyable, with the walkthrough. Thanks, grinnyp.

Oh, joy. The sequel won't play on my computer, either.
Both Chrome and Firefox are completely up to date, as is Flash.

For those who continually "cannot play" the games we feature, it's very likely you're experiencing this problem because you're using a content blocking add-on. The games and features we bring to you take the time and effort of a full staff, web domains, etc., which means Jay pays to provide you with this entertainment. Same for those game designers who make this game. The only recompense for "free" games is in the form of advertisements. Would you consider disabling these add-ons when you visit our site and the games we feature? That way, we can continue bringing them to you.

No, I am not willing to disable my content-blocking software because it doesn't block all ads, just the ones that bog down the computer, try to get personal information, or pop up in the middle of a screen. The non-invasive ads don't bother me, so I don't block them.

There is a balance between advertising money and losing traffic. Advertisers will pay more for the invasive ads, but it annoys your customer base. I had all but stopped visiting this site because of the problem with unplayable game links, and I'm sure I'm not the only visitor to do this.

Have you considered a "donate" button in lieu of advertising?

We don't post unplayable game links and donate buttons don't generate the kind of revenue that's required to run this site. If a game is unplayable it's because of something you have installed on your computer. We simply cannot support those programs here.

But you're right that there is a balance between advertising and traffic. I try very hard to keep advertising to a minimum, and I'm doing the best I can to stay in business so we can continue to bring you the best games available. There are a lot of sites out there with a lot more advertising than we have.

I might point out that it's not *your* advertising that might be the problem Jay, it's the ads on the site hosting the game. I use ad-blocking myself, and never have an issue with the JIG site or the JIG-hosted games (apparently, JIG is whitelisted on the default list AdBlock Plus uses. While I certainly understand the need for ad-revenue...blame the folks who use it obnoxiously and/or as vectors for trojans and other virii for why people block them. :-/

We rarely link to external sites, and since we try to host every game that we feature, that almost always isn't a problem. Furthermore, we never link to a site that isn't an official site for the game being reviewed, in the case of these Japanese escape games, which are almost never able to be hosted by us.

I understand there are people who abuse the system out there, but please don't use ad blocking software here at JIG because we won't ever take advantage of you like that, and we so desperately need that revenue to stay in business.

Really enjoyed playing this series. Had to rely on the walkthrough for the pink since I really didn't have a clue there. Fun :)