One of the main tropes present in hidden object hybrids these days is that someone gets kidnapped by mysterious forces and you must rescue them, be it a prince, a princess, children, a whole town, or some random guy off the street. However, Fierce Tales: The Dog's Heart by Blam! Games (creator of The Keepers: Lost Progeny) goes in a completely different direction. You see, your cute little puppy is kidnapped by mysterious forces, and you must rescue him before it's too late. It may not reinvent the hidden object wheel, but it's still a pretty darned good adventure waiting to be played! 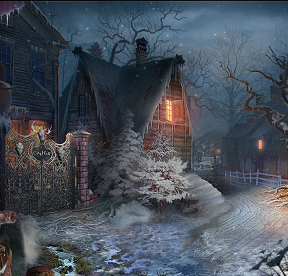 The Town of Houndspoint is one that really, really loves their dogs. Unfortunately and rather suddenly, not all of the dogs are returning that love. A strange pack of savage dogs has appeared and is ravaging the town, killing at least one resident and dognapping other faithful companions on their way through. It all seems like a rather abstract problem to you, the hero, until the calamitous canines make a run at your house and kidnap your cute little puppy Pippa. All you need to do is track the dogs and discover the secret behind the pernicious pack before the entire town is wiped out.

Gameplay is of the point-and-click variety with changing cursors to indicate areas of interest and navigation, hidden object scenes which disgorge one useful item, a nice scattering of mini-games and puzzles, a bottom loading inventory, and a refilling hint timer. Glints, gleams, and glimmers of light highlight areas of interest if played in casual mode, and the usual articles, letters, scraps of paper, etc. are everywhere telling the story as you wander a town suffering from the doggie equivalent of shell shock. Helpful residents of town (not all of them human) are around to answer questions or give more clues to solve the central puzzle of what is happening to man's best friend. 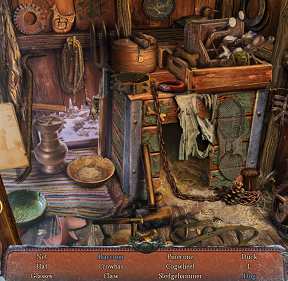 Analysis: With Fierce Tales: The Dog's Heart, Blam! Games has created a beautiful, engaging tale that is sprinkled with more than a bit of humor. Yes, the story is one that has been done before, but rarely this stylishly and with as hefty an amount of gameplay. Bonus points for no ghosts, demons, or other supernatural beings wandering about. More bonus points for being a canine-rescuing hero!

Background visuals are stunning and bathed in tones of blue and brown befitting the night-time setting of the adventure, enhanced by a rousing soundtrack and some pretty nifty animations. Voice acting is competent and not a large intrusion, merely serving to move the story along rather than acting as filler to make the game seem longer. What really stands out is the rather snarky humor that pops up in unexpected places, keeping the story from becoming too overwrought and angsty.

Gameplay length is fantastic and will clock in at five hours or more just for the main adventure (in the Collector's Edition, the bonus adventure is also pretty hefty). Hidden object scenes are the usual list o' stuff but do involve some interactivity to keep them interesting, and the mini-games and puzzles are fun and engaging although on the familiar and somewhat easy side. Three modes of play ensure that a wide range of players can enjoy the mayhem, although it might be a bit too intense for those under the age of eight. Rounding out the experience is a handy interactive map, a feature that is welcome to keep track of all the places that have been explored.

With its meaty gameplay and rather amusing twist on the standard "damsel in distress" theme Fierce Tales: The Dog's Heart is a definite must for those who love adventure hybrids, a genre that has too often, it must be said, gone to the dogs.