In Blam! Games' hidden-object adventure Fierce Tales: Feline Sight, you play a country vet of dubious credentials, unless you think taking a stranger's "sick cat" and giving it a random tablet of "cat medicine" you had laying around on your dusty shelf is the pinnacle of modern medicine. Seems the whole area has had some feline problems, with house cats running away in droves, and a pesky leopard infestation terrorizing the townsfolk. The local authorities are pretty quick to demand you find out what's going on, which seems like a lot to ask from someone who frequently gets locked inside her own house. Seems a mysterious woman is controlling the colossal cats, and in addition to sabotaging your progress to almost comical extent, they're even abducting certain locals. Mightn't it have something to do with the local legends about the native people being driven off the land? It mightn't. But it also might have something to do with two sisters and a love triangle, too. If you can survive the strange woman stopping you at every turn (and your character's own questionable judgement), you might be able to get to the bottom of things. Which you should definitely do, because a town without cats is no town at all. 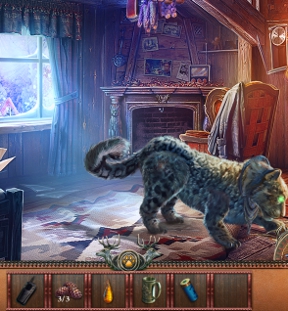 While I have a fairly high tolerance for "adventure game logic", and nobody really expects a game about magical snow leopards sabotaging ski lifts to adhere to reality, Feline Sight's objects and their uses feel both perfunctory and ridiculous at times. An "alpinist" pill to boil water in a geyser, whereupon placing a plate loosely atop the opening will cause it to erupt? That's not how that works. That's now how any of that works! Still, while perhaps too convenient, the gameplay is actually packed with variety. Not only are there a plethora of puzzle types, but each hidden-object scene typically has a different mode of play, so they feel varied in addition to being nicely spaced out too. Items often get used more than once, which is always a good thing for those of us who hate games that make you hunt for "something sharp" an instant after they make you discard a knife. There's an awful lot of "find something to feed the cute little critter so it'll give you something", and that pilot seems pretty easily convinced a woman he's never met before knows how to fly his plane through a snowstorm just because she has a plane ticket, but hey... I guess it would be a pretty short adventure if you were expected to produce credentials for everything.

The plot takes a while to get moving, largely because every little bit of progress is hampered by the incredible leopard whisperer and her magical cats, but it ends up being a bit more twisty than you might expect. Things pick up considerably once you finally reach town, and the gorgeous artwork helps suck you in, along with great little details like the way your inventory ices over when you go outside. Fierce Tales: Feline Sight will take you a solid four hours or so for the main game, with another hour for the bonus chapter if you pick up the Collector's Edition, making it just beefy enough to take up a relaxing evening or two. Though some players may find it a bit over the top, those of you looking for an eye-catching game with variety to burn and a mystical plot of revenge should make a point of checking out the demo.