Hotel Berkley is haunted, though I don't know what you'd expect from a place with more menacing statuary than rooms and peeling wallpaper, exposed wiring, and spiderwebs abound. While the guests have been fleeing in fear from apparitions and nightmares, including one woman whose husband is trapped inside when she bravely runs off to leave him to fend off the green ghostly stink fog himself, the hotel owner seems more mildly annoyed by it than anything else. Luckily, she's called you in, a journalist who knows that a leaf blower is the best answer to unruly spooks, and your uncanny ability to notice that the really obvious mechanisms around you might be worth fiddling with. Elefun Games' hidden-object adventure Fear for Sale: The 13 Keys might be more unintentionally funny than freaky as its characters react in really put-upon ways to the cosmic horrors after them, but is still a fun romp for fans of campy horror. As you soon discover, there's a reason for all the passive-aggressive haunting going on, and maybe that whiny hotel keeper knows a bit more than she's letting on. Maybe a good night's sleep will shed some light on things? Either that or pull you into a series of bizarre, distorted nightmares through the machinations of some creepy "hey gurl" looking specter who peeps in through windows at you wearing a top hat. Whichever. 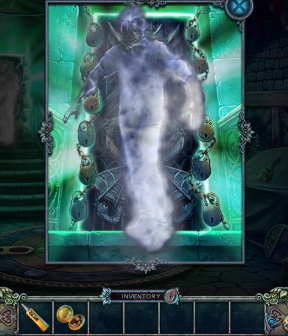 Fear For Sale: The 13 Keys is your standard point-and-click puzzle/hidden-object hybrid, with a few variations to the way the latter is presented to keep it from turning into a simple list-and-scavenger-hunt. There are a lot of minor objects to collect for achievements if that's your bag, and Though the game has the sort of weirdo "why would this item be here of all places" point-and-click object useage, it actually feels a little less egregious here, simply because within the context of the plot you can accept a poltergeist mucking around to lead you to clues about the story. However, it really can't be overstated how much the attitude of some of the characters hampers the atmosphere by making the game funny. When the hotel owner is rebuked from opening the door trapping her guest by a mysterious, menacing green fog, she clucks her tongue and makes the same sort of mildly disappointed, sort of annoyed sound I do when I realize I forgot to buy coffee creamer. It's a little disappointing because the game is trying to be spooky, and winds up coming across as, well, spoopy instead due to inconsistent tone.

Oddly enough, however, that winds up being part of the game's charm. The over-the-top weirdness gives it a great sense of character more straight-laced games often lack, and there's enough variety to the story and the puzzles you'll encounter to keep things interesting. It might be a little on the easy side for most players, though even if you find yourself zipping through the puzzles it's of a satisfying enough length to make for an evening's play. The story actually makes for the best parts of the game, largely due to the way it feels like a classic Tales from the Crypt episode with its themes of desperate deals and opportunistic entities, and its flamboyant area design makes for exploring a lot of fun. While Fear for Sale: The 13 Keys might not have the complexity to make it unforgettable, it has a genuine feeling of energy in its concept and design that's compelling all on its own, and is something fans of more fantastical than genuinely ghoulish horror should definitely check out.