Even if a theater that had been abandoned for years suddenly sent you a ticket to a show, you wouldn't necessarily think "haunting" so much as "hipsters", all with the hanging out in historic old buildings and pretending they enjoy artsy ancient films and whatnot. Annoying, but not alarming. Right up until the cinema slams shut before your eyes, locking everyone inside, and the creepy ticket-taker vanishes in a burst of flames. That right there... might be a red flag. In Elefun Games's hidden-object adventure Fear for Sale: Nightmare Cinema, you'll go on a surreal journey through realms that seem to be connected by writers and ideas in your quest to free the people from the theater. It's weird, wild, and also a little wonderful, and a beautifully made adventure well worthy of your time... painfully short though that may wind up being. 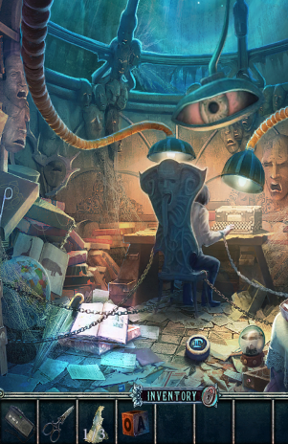 Turns out your coworker has been missing for days, and even though the police aren't buying it, his fiancee insists it has something to do with the movie premiere at the old cinema, The Gate, he received a ticket for... a ticket she's now received as well, in fact. When she tries to pass it off on you, the staff doesn't take kindly to it, and you'll need to find a way in before you can even get down to that whole "saving someone's immortal soul" business. Just because you start off grubbing around in the theater doesn't mean you'll stay there. As you explore, you'll quickly begin to discover this is no ordinary kidnapping. The Projectionist, as people call him, isn't your typical nutjob... he's packing some serious supernatural power and has come up with one heckuva way of dealing with writer's block. Plus, he's not exactly working alone...

All you need to do to play is click, picking up items, solving puzzles, and rooting through hidden-object scenes. Which, incidentally, also have an optional jigsaw puzzle mode you can play if you don't feel like hunting down items off a list. The game is also riddled with collectables that will boost your score, everything from origami figures, to tarot cards, and a whole pack of shifting otherworldly items. The final icing on the cake? You've even got a map that will let you hop around to previously visited locations at a click, and show you which ones have objectives you can complete in them to boot. You may be up against a malicious evil entity, but hey, at least they want you to have a sporting chance. 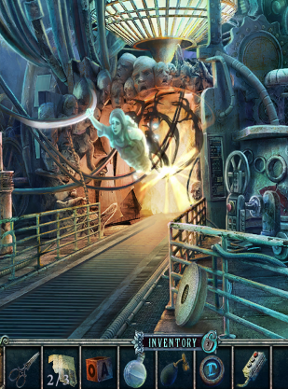 Analysis: Nightmare Cinema really is a ridiculously gorgeous game, with the sort of sharp art, rich colours, and inventive environmental design more casual downloads should be shooting for. Though its premise is campy, its beautiful artwork and intriguing setup makes it immediately engaging and something that keeps you hooked the whole way through. You'll do a fair amount of backtracking, but the worlds you travel through are just so neat that you'll never lack in detail to take in. It's more creepy than scary, but it's also creepy in a big way, with rooms full of twitching mannequins, disembodied eyes, and animated horror movie posters. More than virtually any other casual hidden-object adventure game in recent memory, Nightmare Cinema looks and feels like the sort of thing you can tell the team had a lot of fun creating, and the end result is that you'll have a lot of fun playing and exploring.

The actual gameplay holds few surprises. Apart from all that backtracking I mentioned (and certain sections have a lot), it just isn't that difficult, so chances are you'll fly through it all in a single sitting without much pause. Midway through the game, things seem to be rushed a bit, with objectives being thrown at you only to have the item you need to get past them right in front of them. It's not really a major flaw in the game itself, but it does mean you'll be that much more disappointed when it ends so quickly because you'll have been so wrapped up in it. And I mean it ends quickly... for many players, two hours is going to be a generous estimate for the main game, and it really seems like the "bonus chapter" provided in the Collector's Edition shouldn't have been a "bonus" at all, but an integral part of the story and game, especially since it tacks on another hour or so of play time. You'll definitely want to try the demo for this one, and know that what you're getting into won't last for very long, but while it does, Fear for Sale: Nightmare Cinema is a fun, stylish, and creative gem that makes for a perfect evening's adventuring.