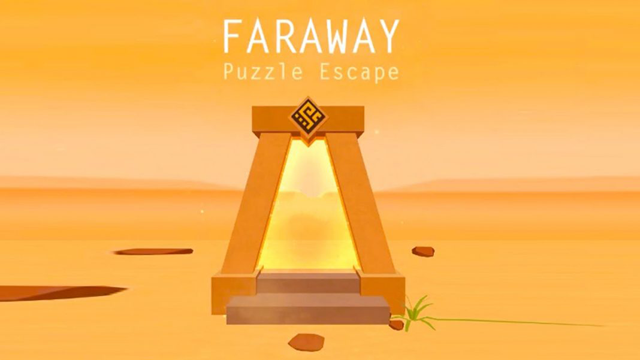 Faraway: Puzzle Escape is a mobile point and click escape game that can also be played in your browser. The game opens up to a title screen where a gate can be seen, or it might even be a portal since there's something glowing. Immediately you see two buttons where you can download the game for The Google Play Store and/or the App Store.

The game itself has stunning visuals and a very relaxing ambient soundtrack. The puzzles itself are pretty logical and in each level you have to find a tablet that will fit on the top of the next gate so you can activate it. But there's more to be found, besides the portal tile you also have to find 3 notes. You don't need these to finish the level, but they will explain the plot to you since they look like notes a previous traveller has left behind.

As always in escape games, you need to look for visual clues that can help you on your way. Certain patterns or objects may be useful somewhere else, so I recommend playing this game with a little notebook next to you, just to take notes or scribble down clues. And, you might feel like a true adventurer if you do, at least that's what I felt like when I scribbled down everything that I found, in the hop that it would open a new pathway for me to explore. 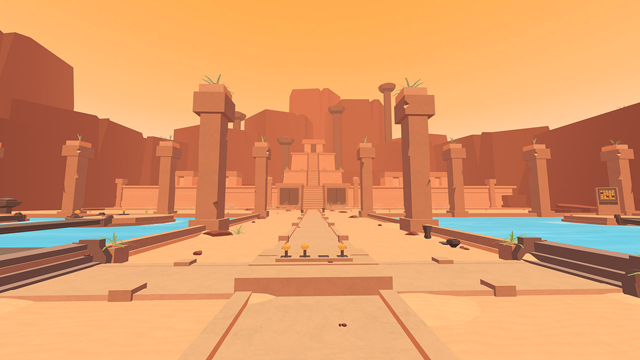 The developers really made an effort to create a very solitude atmosphere, the ambient music and the style in which the game is made really make you feel like you're alone in this place, and the notes you find really strengthen that feeling.

Faraway: Puzzle Escape is played like any other regular escape game, with the mouse. You click on things, interact with them and pick up objects. The main difference is that since this is actually a mobile game, you have to swipe and slide to interact with levers, or to look around. I've really enjoyed playing this, as it took me quite some time to figure out the later puzzles, but once you've figured it out you want to celebrate the success!

Would've been a lot better with more freedom of movement; it would've likely felt as Kairo's younger sibling. As it stands, it feels claustrophobic (and clashes quite heavily with with the close attention you need to pay to your surroundings to find the first two notes on each level). Nonetheless, it's still very nice.

Has anyone found the second (2/3) note on the 6th level? 1 and 3 I have found without trouble, but 2 keeps eluding me.

Power of posting. Found it. Done with free part of it. The mobile version has an in-app purchase that gives you 6 more levels for $3, and there's also Faraway 2, with 9 free and 9 paid levels ($3.50 this time). Note that Faraway 3 has nothing to do with 1 and 2, it's made by different people and is in a different genre.

Don't press "Exit to Menu" unless you want to quit the level.

If you do restart a level, you get to keep the notes you already found, but you have to redo everything else.

Nothing happens. Tried it in firefox and chrome, it just shows the gate and a down arrow but I click everywhere, nothing. Looked at the walkthrough, a red dot flies in from the right, nothing like that for me. Am I the only one?

@ Kee -
The gate needs to be clicked and dragged, as well as several other parts of later puzzles.