The world can be a lonely place. When the world is a monochromatic wasteland and you're the only person in sight, it can seem a lot lonelier. But then, when you stop and listen, the world begins to speak. This is the idea behind Lesingevolant's game Faint. Faint is one of those exploration games where describing anything beyond the most basic elements of gameplay almost seems like cheating. There isn't much in the way of controls: use the [arrow] keys to move. You can hold the [F] key to speed your movement, but most of the game is based on standing still and listening. Whenever you're not moving, the wind fades and if you're lucky, you'll hear strains of music. Follow the sounds to find relics of the world gone by. Each of them will speak to you and give you clues. They also change the color of your scarf, which helps you open doors. Each relic, though, also introduces dangerous artifacts into the game. Stand too long near one of these, and you have to restart the level. Walk through a door whose knob is the same color as your scarf to complete the level. 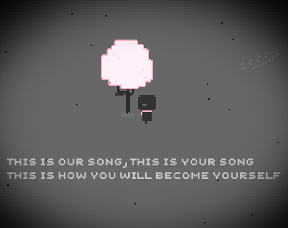 Faint is a lovely game that uses simple pixel art and atmospheric sound to create a lonely world that seems much larger than it actually is. It can be hard to keep track of where you've been, but in a game like this, being lost is a central element. (One tip: on the screen you get between levels, the artifacts will eventually form a circle, so you can keep track of them that way.) You'll need to wear headphones if you have them, or have a truly excellent speaker system, but as long as you do, it's easy to immerse yourself in the tiny, pixelated world of the main character. There are even two endings, so you even get double the playtime out of it.

I call bs, it's just walking around. The only thing I found was the door.

You've got to be prepared to be INSANELY patient if you want to play this. I'm out.

And FWIW, that "wind" effect is WELL annoying.

Found and stepped out of three doors so far, going around to find more though I found about six or so different objects.

A couple of tips for speeding things up:
-- The "key" items which colour your scarf, allowing you to enter the matching door, are invisible until you get close to them and listen for a few moments. That's why it's vital to stop and listen for them every now and then.
-- Don't be distracted by the doors, which also make music that matches their "key" item.
-- While holding F, it becomes impossible to "trigger" the static shrines and call a creature, even if you're standing right next to one and not actually moving, so you can run around with impunity.
-- The doors are always visible, and neither the doors nor the "key" items move around, so you can zip around the area, noting where the door for each colour is first, and then search for the "key" items.

On finishing and the two endings:

-- In order to complete the game, you need to go through the purple door, but only after having gone through every other coloured door. Going through the purple door prematurely will dump you into a tiny room with a creature; all you can do is "die".
-- To see the alternate ending, go through every door except the purple one. Then, on your next pass, go straight to the bottom-right corner of the map without picking up any colour, i.e. keeping your scarf white. There will be a door with a white knob which you can enter to reveal an eighth icon on the element screen. Now enter the purple door as normal to complete the game.

This would be intriguing if the objects actually said something worth the wait. But it is just sort of pseudo-mysterious stuff, which is disappointed. It doesn't feel like there was a lot of world building or storytelling, which are what really make these sort of games.

The music for the yellow door/object is reminding me of some other game. Not the melody, but the sound used to play the melody. I can't figure it out though, not even hints to what game, I've just got that nagging feeling of KNOWING I played something that used the same tune. Anyone here able to help me recognize it? I really wanna say it's a computer game...maybe one I found through Jayisgames...but I can't remember anything about it yet.

Each of the 'artifacts' gave the same tune, although played in different ways (from 'church bells' to 'electric guitar'). Also, regarding the second ending,

The white door is available earlier than 'right before the end', although it is in pieces at the very beginning.

The description on the game page is for Roommates, not Faint and there are no comments either.

Any chance someone would be willing to make a map?

Wish we could edit comments. "Disappointing"

I made a map http://minkette.files.wordpress.com/2014/03/faintmap.jpg some of the statues are guessed from memory as I couldn't screengrab their location without dying. Everything else is accurate and to scale.

Tothra15: Could it be Song of Storms from OoT? (Ocarina of Time)

Awesome Map, Minkette!! How did you make it?

Princess Sparkle: The melody does kinda sound like the Song of Storms, but it's not the melody that sounds familiar to me. Thanks anyway!

What sounds familiar is the sound itself...it's like how oniyaajila said, every artifact has the same melody, but they are played different ways.

The sound for the yellow door, or what looks like a broken-down robot, is extremely familiar to me. I can almost picture another game I played (and enjoyed) that used that exact same sound, but (of course) created their own music with it. I wish I could remember the game so I could go back and play it again! Unfortunately, I can't remember anything to help me figure out what game it was. I'm sure some would say it's pitiful, but I've come back every few days just to hear it again, hoping to remember one of these times, but so far no suck luck.

@tothra15: I don't know, if we're anything alike, but when I saw the robot-like artifact and heard the synthesiser music I thought of Chrono Trigger and Robo.

here's a picture of the final circle of items, because i know i was confused keeping track of what doors i had went through each time

The game is great !
I even got 3 of 20 revelations -- black rooms with white chasers and some things that give a hint about the story.

it is about a guy who was in a car crash! that is why there are parts of the road and car parts and other things...
I'll now try to get other revelations as well !