If don't find yourself waking up and bursting out of a top-secret high-security testing facility on a regular basis, you're probably not spending your Saturdays properly. The result of a twelve-developer jam-style game creation chain, Experiment 12 is a twisted adventure to discover the truth behind your imprisonment. Each short chapter in this collaborative game gives you a tiny piece of an intriguing story set by (developer tags ahoy) Terry Cavanagh, Ian Snyder, Jack King-Spooner, Zaratustra, Richard Perrin, Michael Brough, Robert Yang, Alan Hazelden, Benn Powell, Jake Clover, TheBlackMask, and Jasper Byrne. 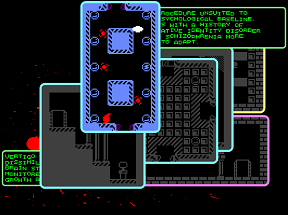 Experiment 12 combines a mix of puzzle and platform levels made in Flash, HTML5, Game Maker, and Unity, each built in a period of three days. In most levels, you can move around using [WASD] or the [arrow] keys and deploy an occasional action with [space], though one level does require mouse input. We're trying not to give away too many of the details of the plot here, but it's interesting to see how the story grows based on each successive developers' interpretations of the events before them, and how they build on what they've been given (sometimes directly lifting assets from earlier levels) to make a satisfying and compelling tale. Could chain games be a new trend in storytelling and game development? That's an experiment worth exploring, starting with this intriguing collection.

...What a ride! From what I was able to understand in this game (which was barely anything), it was an amazing story.

Hmm... Although, in Robert Yang's stage, there were characters showing up as Chinese stamps; is that supposed to happen?

I love the idea of just having a guideline then having 12 artists interpret it and then make a story out of it. It's really confusing; I don't know if I'm even making sense. XD

Oh and also...I love how you don't really have a strict set of rules; you can play however you want, and pretty much get the same story.

@aznwulf96: I had the same issue with the Chinese stamps. I assumed it was part of the cryptic nature of the chapter, but now that you mention it, I noticed the screenshot on the menu looks like it has english text there. I think the stamps do correspond 1-to-1 with letters. Even on my first playthrough, I interpreted the final screen (a string of 3-2-7) as "end of chapter," and if you look carefully, the symbols for where the Es are match. So with some tedious homework, it looks like there is a cryptogram to be solved throughout the level, but it could also just be a bug in the system somewhere. I think it works well for the game though.

A file in the package came up positive in Avast virus check.

Think I missed something with this one - tried chapters 1 & 2, both came across as a complete mess. Gameplay awful, "enemies" pointless, goals unclear, left wondering what the point was. Skipped to the last chapter, gameplay a little better, still left wondering what the point was. I like retro-styled games, I like platformers, I like puzzlers; I really don't like this though, sorry!