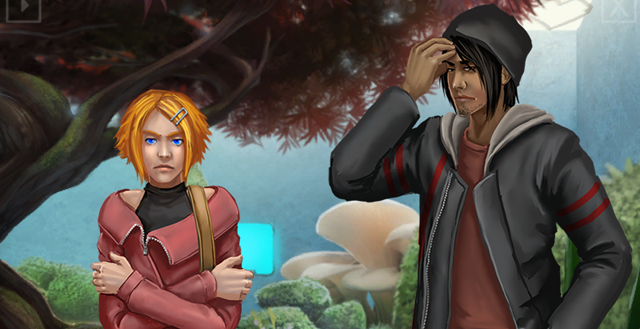 It is no secret that the fans of JayIsGames quite enjoy a good escape game. Indeed, the weekly weekday escapes are some of the most popular entries on the site. And today for all escape lovers out there, we want to show you a special treat in the one-of-a-kind Exit/Corners, as well, a different sort of escape game. The danger and claustrophobia is no less real, though. Did I mention that there are puzzles and an (implicit, at least) time limit as well?

Imagine, if you will, waking up in a room with no memory of your arrival or transportation there. Unlike usual, though, you soon realize you are not alone. You find not one, but four other companions nearby, and it soon becomes clear that you will need their help and cooperation in order to proceed. You are trapped in a large mansion soon to be instilled with some sense of urgency in the form of a time limit. This becomes a task easier said than done as from the getgo you realize personalities can be distinctly different and clash violently.

After a brief period of self-discovery and barely introducing yourself to the other contestants, you realize that you are not as alone as you think. Each of you has a weird sort of electronic device resembling a smartphone. But unlike a smartphone, the functions of this device are limited to only a single option - texting a certain person back in the outside world. For each character, their person - or Contact, as they're later referred to, symbolizes an important part of their world from the past. 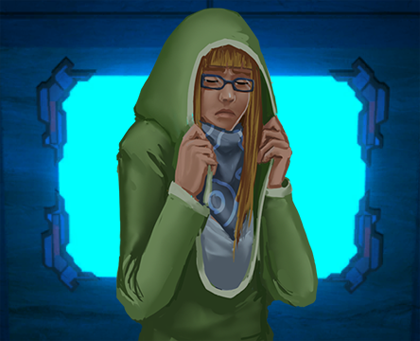 And all this is before you discover you have a common friend - enemy - frenemy? A low-resolution face appears on a screen and wastes no time in telling you about this 'game' of theirs they set up to test you. Despite an extremely narcissistic and at times combative, even twisted personality, this other entity claims to want to help you. Calling themselves the moniker Sent, they eagerly insist that they very much want all of you to survive the game and to escape. How Sent's apparent regard for your collective well-being squares with him locking you into a twisted maze of puzzle, psychologically pitting pairs of characters - whom he affectionately terms 'Contestants', and even his notorious catchphrase is not so clear.

The story is released weekly in episodes (chapters), which each one leading cleanly to the next in a fairly linear progression of the storyline. In each chapter you can expect a lot of dialogue between the characters that is mostly predetermined, aside from the occasional choice between several options by the main character, Ink. Each chapter provides both a natural stopping point and a bit of a tease/cliffhanger, and put together they flow naturally. By the time of publication of this review, you should be able to play the bulk of them. There is a second part slated for release next year.

The controls for Exit/Corners are much the same as you would find in other point-and-click games. Click the mouse or press [Space Bar] to advance through text. Scrolling or using arrow keys will help you go through the backlog of chat. If you want to skip all the chat and get straight to the essence of a chapter (a key decision or of course, the puzzle), you can hold [Enter] to do so. Puzzles are controlled entirely with the mouse, usually by clicking or dragging to switch different tiles around on a monitor interface. Chapters can be replayed to your heart's content if you wish to reexperience things or change a key decision.

One constructive criticism I have of this game is despite the choose-your-own-adventure theme, the decisions and story branching is far more limited than first appears. About halfway into the story, a decision is offered about which path to take, and upon choosing one option, you discover that it's not actually an option at all. Perhaps this was done to keep the story linear enough to force into chapters without branches overlapping and spoiling later parts too early, but I think Percon would do well to incorporate a more robust selection of outcomes and choices in the completed game. Things like multiple solutions for puzzles that could affect the story could also increase the breadth of the adventure.

So once again, if you're a fan of escape games and/or you enjoy point-and-click stuff, I think you just might find Exit/Corners to be your cup of tea. There is an abundance of dialogue and decent character development to boot. Puzzle hints are cleverly and gradually revealed by talking to your fellow contestants, encouraging you to solicit just enough help to seek out the answer on your own. It's up to you though, reader. You could play this game by clicking the link at the bottom of this review.

Or you could die.

Characters are hackneyed, so dialog doesn't add much to your typical no-backstory game. Mostly empty talk, and you have to click through a ton of screens between puzzles. Element of danger adds a little bit of edge, but overall not enough to keep playing.

Sorry to say that I agree with @diorist. It's not really an escape game at all. It's just a graphic novel. For game-play, there was only one feeble puzzle to solve.

The puzzles are fun enough (if little varied) and I don't think I'd even mind the graphic novel elements if they A) weren't so numerous, or B) didn't make me wear out my mouse button to move through them. Maybe if there were more than one line of dialogue per screen?

Anyway, the game's not finished yet. As of now, it's up to chapter 16 out of 30, so I might come back in two weeks when it's all finished.

Not a puzzle game. 99% story which was... not a story so much as hinting at a story.

I got tired of pressing space bar for 20 minutes to get a single puzzle.

Mostly empty talk, and you have to click through a ton of screens between puzzles. Element of danger adds a little bit of edge, but overall not enough to keep playing. diebestetest