It's murder most foul, but also most unusual. There have been a rash of deaths lately, as young women have been found not only dead on the streets of Paris, but completely dehydrated to boot. It's enough to bring you, one of the world's most renowned detectives. out of an early retirement, especially when the father of a missing young woman contacts you out of desperation. And in Blam! Games' stunning new hidden-object adventure thriller, European Mystery: Scent of Desire, you're turning out to have quite the nose for danger indeed. 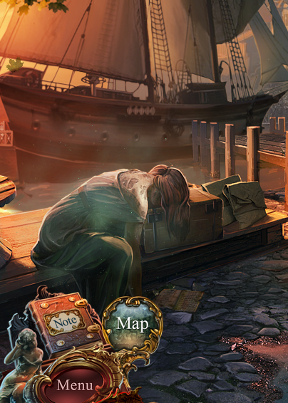 With a cholera epidemic raging, the streets are already in a panic, and the police have their hands full. It's essentially the perfect time for a good old fashioned madman to try to get away with murder, but that's what you're here to stop. Click around to gather clues, solve puzzles, and tackle hidden-object scenes. Of course, what's a proper investigation without a little alchemy? Perfume, that is. Early on you'll gain access to a special portable machine that can be used to extract powerful scents that you can then combine and mix to your little heart's content.

Don't get too distracted mixing up your sure-to-be-a-winner Eau de Corpse, though, since you still have a mystery to solve and someone seems pretty intent on making sure you fail. You've got a masked man after you, someone whose sharpshooting abilities are even deadlier combined with some diabolical chemical knowhow that's allowed him to set off devastating chain reactions or even toss lethal stink bombs. Will he prove to be more than a match for you?... well, uh. Probably not since you're the protagonist, but hey, still. Exciting! 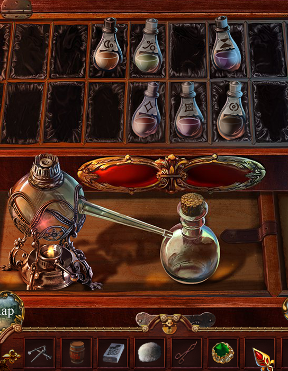 Analysis: Scent of Desire is one of those games that, if it were a mysterious stranger glimpsed across a crowded room, your heart just might go pitty-pat. With its rich colour palette and beautiful animation, this game is a serious looker, though maybe not as crisp as it could be, and easy to just sit back and lose yourself in. Apart from some awkward looking CGI characters, that is. The environments are lush and a pleasure to explore, and hunting down scents in each one to mix up various perfumes and potions is a clever touch. Most players will probably figure out who the culprit is if they're paying even partial attention to the story after about a half hour, but by muddying the motives and methods of what he's doing, it still manages to keep you intrigued. Come on, the guy is essentially a goofy costume away from being a Batman villain... how can you not love an antagonist like that?

Though the gameplay holds few surprises for anyone who's played a game of this type before, it also holds few flaws. Hidden-object scenes are beautifully illustrated, though while there aren't many of them those that exist tend to be repeated. You'll spend a lot of time going back and forth over Paris, but with plenty of cutscenes and events to keep you occupied, it's not nearly the annoyance it could be. At over four hours for your average playthrough and an hour or more for the bonus content, depending on your chosen level of difficulty, European Mystery: Scent of Desire is one of those beautiful games that's simply satisfying to play. Try the demo before you buy, but fans of mysteries and thrillers will drink in the gorgeous Parisian style with pleasure. Just... don't try this at home. I'm pretty sure "I want to extract its scent to make a lovely perfume" won't really go over well with police when found loitering over a freshly killed corpse.