Escape from the Room with 10 Safes 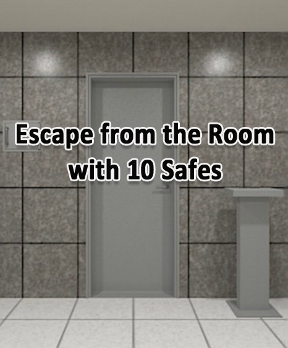 Sounding more like the title to a 50s era popcorn muncher you'd see on some broadcast channel's late late show, Escape from the Room with 10 Safes by Hottategoya is decidedly tamer, shorter, and less edge-of-your-seat. Unless you are afraid of maths. As you gaze around the room and discover that ten safes actually amount to about ten algebraic puzzles, your opinion of whether this will be an enjoyable escape should be easily decided—either you're giddy at the chance to play with numbers or you're already disappointed, conjuring up images of your mean old Math Teacher from 9th grade.

See, that podium over by the door contains a short string of numbers and functions which you can change, given the right buttons, to equal a number on the front of each safe. Open the first safe, you'll get a new number button to replace any of the others to make a new equation to open the next safe to get a second number button and so on until all ten safes are open, earning you the key to the door, likely in a matter of mere minutes. In typical Hottategoya fashion, the room isn't much to look at, either; while not as imposing as The 5,000 Fingers of Dr. T, whatever your attitude toward mathematics, you will feel happily liberated once you succeed.

Play Escape from the Room with 10 Safes

Escape from the Room with 10 Safes Walkthrough now available!

Escape from the Room with 10 Safes: Math Solutions Walkthrough
a.k.a. Fun with Maths Time!

Directions:As you open safes, you'll get new numbers. Place, replace and/or move around the numbers on the podium as indicated to make a new equation. When your equation's sum equals a number on a safe's door, that safe will be unlocked.

Wow, I loaded this game and looked around and my first reaction was "What in the ever-lovin' sweetness is this nonsense?".

Ok, maybe my original thought contained more profanity than that, but it's christmas times and I thought I'd clean it up for the kids.

After reading what I was supposed to do -(Note to self, read whole review before searching for a screwdriver and wobbly painting)- this was a breeze. I surprised myself with my powers of BIMDAS. Well... just MAS I guess. Seriously though, despite the 8th grade flashbacks I would like to see more of this type of escape game. I hate that I loved it.

Hehe. Thank you, Dandy! I do try to make my reviews helpful. (I also feel the same way: love/hate this sort of puzzle.)

Escape from the Room with 10 Safes: Math Solutions Walkthrough
a.k.a. Fun with Maths Time!

Directions:As you open safes, you'll get new numbers. Place, replace and/or move around the numbers on the podium as indicated to make a new equation. When your equation's sum equals a number on a safe's door, that safe will be unlocked.

Just a basic math drill once you get the knack.
Merry Xmas to all !