It's been almost three years since we last heard from Mr. K, a friend of ours who probably never gets his security deposit back because he immediately renovates each and every place he moves to into an elaborate concoction of puzzles and mechanisms for his friends to escape from. Thanks to Tesshi-e, he's finally back, and now it's time to Escape from Mr. K's Room 4, featuring hippos, dapper birds (of course), piano music, a great view, and even a relaxing beverage. Awwwww yisssss folks, now we're gaming with style. Remember to click the language button to choose English before you start the game if you can't read Japanese! 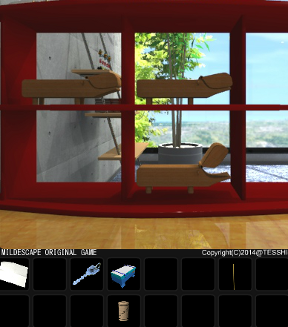 Like most Tesshi-e games, Escape from Mr. K's Room 4 lacks a changing cursor, so you'll have to click everywhere to find items and clues to escape. All items can be examined closely when you pick them up by highlighting them with a click and choosing "about item", and many of them need to be in order to discover even more clues and additional objects. Viewing objects up close is also the way you can combine things in your inventory, so if you want to try, examine an item, then click another one you're carrying and try to place it on the magnified view. You may also need to click and hold on certain things to reveal their hints! Tesshi-e's games have always married whimsy with logic in their design, and this latest is no exception as it packs a surprising amount of secrets, clues, and puzzles into a relatively small area. The angles can be a bit of an issue when it comes to manipulating your environment since there are so many sneakily hidden ways to approach things, but if you're a fan of Tesshi-e you already know to search every nook and cranny, sometimes more than once. Can you find the way out and the Happy Coin? This one might take a little arts and crafts to do so...

Thanks to Cyberjar88 for sending this one in!

lol moon on one

Really great one, logical all the way through.

The only disconnected bit for me was:

Turning off the fan wasn't immediately associated with the unused angle behind the bed. Might have missed something during the animation that made it clearer though.

Ha! Great timing. I was right in the middle of a Tesshi-e binge.

Very nice, except for my pet peeve in escape games...

The code that doesn't work until the game decides it does. Once I've got Mr Birdy number 4 in place, I know the other one's going to be number 3, but I can't open the door until that Mr Birdy is in place as well. At least TomaTea tells you when they just won't let you enter the code yet!

Wow, I feel dumb now...the only place I got stuck on was literally in front of my face...and appropriately enough,

Whoo, my Tesshi-e withdrawal is over! And I didn't need the walkthrough for most of it

Thanks for the walkthrough, SonicLover!

I don't know if it's randomization or transcription error, but my birdie code was slightly different than yours.

Dora,
I light of our recent discussion re: site funding, I am curious how it is that devs like tesshi-e are able to keep producing high quality games and if there were any way for us to support him/ them doing so.

Does coming to this site w/o ad-blocker benefit the dev? Clicking links? Going their home site and clicking links/ loading ads?

It seems a lot have gone to mobile platforms (the dismantlement crew), and its a shame imho.

Thanks for the feedback.

So many escape games for me to play today!!! This one was a lot of fun. I managed to get out with the happy coin without using a walkthrough.

No walkthrough needed? I must be a real tesshi-e addict. Great game! I really liked

the bit of perspective with remembering the slightly lower level to get into the glass slot/tube to get the end key.

I enjoy Tesshi-e games because they are not usually too difficult, and I like how there is always a second end that doesn't require doing something different before the normal end's last step (that is, you can get all the way to the final key without saving and still find the happy coin). However, I think they could use some improvement, such as adding a changing cursor (it's been said before, but it bears repeating) and

maybe not using a picture frame code in _every_ game, even though it is kind of one of his trademarks, along with Mr. Birdy and Mr. Hippo.