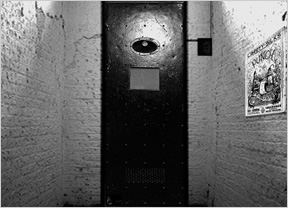 Escape from Kilmainham Gaol feels like it could be set in a movie of wartime and intrigue... something between James Bond and The Great Escape? Creator Matt Slaybaugh (also of the entertaining Escape to Obion point-and-click series) plunks the player into a desolate, barren cell with seemingly no hope of escape. But wait, what's this? A letter tucked into a chink in the wall. Apparently your captivity is due to one Simeon Meade, a member of the mysterious Talos Organization. He can't help you escape directly, but it is possible to unlock your door from inside the cell... and apparently, one of Meade's operatives has prepared your prison with the necessary tools. Of course, it can't be too obvious, or else the guards will be tipped off. Looks like you're going to have to solve some puzzles!

I like this game for a number of reasons. The appearance of the cell seems photographically accurate (especially the texture of the brick walls... nice), and really does give the sense of being trapped. I also appreciate that for once, there's actually some sort of rationale as to why the player must go through such hurdles to escape; it's enjoyable to feel that there's some sort of logic to the scenario beyond arbitrary whim. The puzzles, a bit less fanciful than those of most escape games, correspond well to the environment. Also: no pixel-hunting! Hooray!

That being said, the puzzles are not terribly creative, and one in particular struck me as less-than-intuitive. Also, while the game's music is certainly atmospheric and appropriate, it can eventually become annoying and intrusive; the option to turn it off would have been nice. On the whole, the game could have benefited from a bit more attention to such details, as well as a little more understanding of what the player should expect to be logical in the game world.

Still, Escape from Kilmainham Gaol is enjoyable and interesting. A different spin on an old standard, the game will satisfy your urge for adventure and intrigue... all without leaving the comfort of your cozy home/office/beach cabana/aircraft carrier. Not a bad deal!

Short one. Here's a walkthrough.

There's an option to turn off the music on the bottom-right, the speaker icon, but it takes a while to fade out; I agree, the music got on my nerves too. Not a bad game, though, was pretty quick.

There is an option to turn off the music. Little icon in the lower righthand corner.

As far as the puzzles go, I'm rather lost.

I've gotten the the cover off the panel by the door, looked through the peephole, I've found the note, tried placing the fuse in all three spots, and looked at the markings on the bench.

Now to figure out what the hell to do with this next one...

Turn on the alarm and look through the peephole, you should be able to see a couple sets of numbers/letters on the left. Put those together to figure out about what you should put into the second puzzle

Actually, there is a way to turn off the music, it's just very tiny and down in the right corner.

Well, check it out. I didn't even see that.

Short one. Here's a walkthrough.

I'm out! That was just frustrating enough, if a little short. I dunno what everyone was complaining about the music for, I think it was suitably dire enough to warrant a dedicated effort to escape! Who knows who might have come in after the three hours was up?

YaY. Not terrible difficult if somewhat short. First escape that I didn't once think to search posts for hints.

Okay, i got through it, but i had to use the posts - and i don't understand WHY the 3x3 panel combination is what it is. i know it has something to do with the tally marks on the bench, but beyond that i'm lost. Anyone care to explain?

That was easily the most frustrating and least rewarding escape game I've ever played. The puzzles completely lacked in terms of being intuitive. What I found to be the most irritating and useless "feature" was how what you could see out the peep hole would randomly drift in and out of focus. It wasn't clever, it was merely tedious and needlessly frustrating.

So the numbers are backwards because you're using the wrong side of the door. Wouldn't that mean if you see a 1 the guards would see like A. Huge plothole, boom.

The peephole focus is not random.

It changes focus when your cursor moves up or down. You need to adjust the focus to make the view clear.

The game was just okay. I figured it out myself. Not complaining though. It's nice to play a game once in awhile where I don't need some help.

For BEAGSLEY and anyone wondering about the bench marking puzzle:

There are 5 separate images on the bench. Each contains 2 numbers so that's a total of 10 numbers. Since there are only 9 spaces for single-digit numbers on a 3X3 grid (excluding 0), one number is duplicated, yes? That number is 6. Think of the 5 images as opaque or see-through. If you overlap them to create the tic-tac-toe grid, fill each space with a different number (except the 6, which is your starting point), then you arrive at the solution. Get it?

Some interesting but probably irrelevant information:

Kilmainham Gaol is in Dublin, Ireland, and is indeed a prison that is no longer in use: http://en.wikipedia.org/wiki/Kilmainham_Gaol

The great-grandfather mentioned in the letter is Thomas J Beale, who supposedly hid a large amount of gold and silver in Virginia in 1820. There are a set of three ciphers which are meant to give the location of the treasure: http://en.wikipedia.org/wiki/Thomas_Jefferson_Beale

I've understood the bench puzzle, but I can seem to get the cell room number.
The panel by the door won't go off, even using what was said in the walkthrough.

Did I miss something evident (I've been looking for more info for quite some time) ?
I'm wondering if my browser is running the game well...

Wow, that's a lot of background for this game, but though the number and moving-things-around bits of the game were well-thought-out, the parts with the blinking lights and fuzziness almost hurt my eyes. It wasn't the same as a pixel hunt, but making the player squint doesn't make for a good escape game. The rest of it almost made up for it, though, and I hope to see more of that and less blinkiness in the next installment.

Why are both of the escape games rated together??

I really liked the Toya Room 2 game, but found this one not fun.

I got stuck at the bench puzzle. I knew how to solve it, but I couldn't figure out HOW to add in the numbers. As that's what the walkthrough said after I got frustrated with it for the first 20 minutes.

After playing it on a later (up to date) version of firefox it solve my problem.
There are some features that aren't working (like the peep hole or the panel next to the door.

how did everyone figure out the first step:

how to click the screws in the right order to get the panel off to reveal the 9 number panels?

i didn't need to use the alarm lights like the walkthrough suggests. i could just see all the parts of the cell numbers without them for some reason